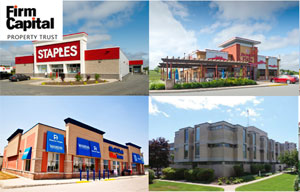 For the Toronto-based trust, which is affiliated with Firm Capital Corp., the acquisition is another step in the growth and development of the two-year-old trust.

Ultimately, the trust wants to raise its profile with investors and move into the real estate big leagues, said president and CEO Robert McKee.

“A critical milestone for us is not so much the asset size but being a public entity is to get to the $100-million market capitalization size which really is an issue for liquidity for the investors. It also starts to get you to a position where you have a broader following and then we can consider whether it makes sense to move to the TSX from the Venture exchange.”

Currently, Firm Capital has a $35-million market cap, well below the threshold necessary to attract the attention of Bay Street analysts and most institutional investors.

“That (threshold) we would go to when we feel it is appropriate. Effectively we are doing almost all of our reporting and timelines as if we are on the TSX,” he said. “From that perspective, we are substantially meeting all of the TSX deadlines.”

FCPT, which was formed in August 2012 and really got started with the acquisition of four retail assets in November of that year, swelled to more than $80 million in assets following its most recent 25-property acquisition.

Besides bulking up its portfolio, it ups the trust’s geographic balance in favour of Ontario versus Quebec. “It gives us a bit of a footprint in the West and a little bit more on the East Coast,” said McKee.

It should also add to the trust’s bottom line. “It should be a very accretive transaction for us,” he said.

Following the deal, 54% of net operating income will come from Ontario, followed by Quebec (31%), Nova Scotia (10%) and British Columbia, Alberta, Manitoba and New Brunswick (collectively five per cent). About 60% of NOI will come from the firm’s net lease convenience retail, followed by industrial (31%) and core service provider office (nine per cent).

The trust initially announced the acquisition in May, when it said it would be buying 27 properties, totaling 234,768 square feet of gross leasable area for $22.9 million.

The portfolio has a weighted average lease term of 3.4 years and a total of 50 tenants with the largest being PPG Industries Inc., which operates predominantly under the Dulux Paints brand and accounts for 32% of Net Operating Income. The portfolio is approximately 95% occupied.

Firm Capital management and trustees provided the majority of the remaining 30% purchase price (about $9.7 million), McKee said, which afforded the trust more latitude in making the deal.

Going forward, “it gives us a little bit more certainty that we are going to be able to do acquisitions.”

FCPT unitholders likely can expect similar deals in the future.

“The way our program works is that the public entity has a right to a minimum of 50% of any acquisition that we source here,” McKee said. “This one, because we had some excess capital, we pushed and took a little bit more.”

McKee touts FCPT’s board as a major strength, beyond serving as a ready source of investment capital.

The latest deal is the biggest since last July when FCPT acquired 25 industrial buildings in Montreal for $48.2 million, which at the time represented about 40% of its total property holdings.

The purchase was comprised of 1,029,898 square feet, consisting of 17 multi-tenant and eight single-tenant industrial buildings near the Pierre Elliott Trudeau Airport and the Trans-Canada Highway.

Going forward, McKee expects the trust will focus on retail and industrial sectors. (Its mandate includes multi-residential but finds that market difficult currently.)

“We really like the multi-tenant industrial sector and we also like the retail sector as well, especially the more convenience-oriented retail. We are not big players in the fashion segment. It is not likely that we would go out and buy standalone enclosed shopping centres that have a high fashion component.”