Just weeks before he hands over the reins of First Capital Realty to his successor, chief executive Dori Segal is content: the company is well-financed, has carved out a solid urban retail niche for itself and has an impressive development pipeline.

“Even if we acquired no assets at all in the next five years, we are going to invest $1 billion,” he said this week at a presentation to real estate reporters. “Let me put it this way, the new CEO of this company is definitely not going to be bored. I can guarantee you that.” 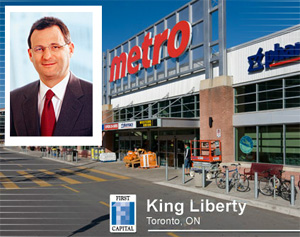 The Toronto-based company’s focus on organic growth through development makes sense, Segal said, because there is currently not much to buy and First Capital already owns all the land it needs to keep it busy for years.

“I believe that ’15, ’16 and ’17, given the slowdown in the Canadian economy, the fact that the Pan Am Games in Toronto will be over, you are going to see construction prices easing off,” he explained. “We own a lot of properties that require a lot of building, we don’t need to acquire the land to do the development we want to do, we already own it.”

He pointed to the scarcity of sales in the retail space over the past decade; only Bayview Village and Sherway Gardens changed hands in the GTA while 300 office properties were swapped. Given that most choice retail property in the country is owned by 10 or 12 large and well-financed real estate companies, he doesn’t expect much activity on that front.

“I don’t think there are a lot of acquisition opportunities. It will be a lot more about assembling and growing your existing assets.”

“I’m going to be travelling more with Gazit,” he said.

Israel-based Gazit-Globe specializes in grocery-anchored supermarkets in major urban markets and has more than US$21 billion in assets under management.

Going global is something of a trend for Canadian real estate players, Segal noted, given the recent foreign forays of the pension-owned players such as Ivanhoe Cambridge and Oxford Properties that is now being emulated by much of the rest of the Canadian industry.

“When I meet with investors, I get asked a lot more about Gazit over the last six months than I ever had before.”

Segal noted plunging oil prices will slow Canada’s economy but will be a boon to countries and regions such as Europe that are net-energy importers.  “As a Canadian investor, until probably last year, you probably didn’t need to think about diversification.”

Asked about future economic growth, he joked, “I’m a shopping centre guy, you want a macroeconomic prediction from me?”

He does has a “very strong opinion” about the co-existence of ultra-low interest rates and economic prosperity. The one country that has carried it out for a long time has been Japan, with poor results.

“Over the long period of time, if you think that interest rates are going to stay low, you are going to have to be very picky about the quality of businesses that you invest in.”

Given its focus on well-located urban retail delivering the daily necessities to condo and apartment dwellers, Segal is less worried about the rise of online shopping than most retail real estate execs. “We strongly believe that in the next 10 years, you’re not going to go to the dentist online,” he joked.

Speaking from his Liberty Village headquarters, a forest of new condos surrounding equally new retail outlets, he added that people are only too happy to shop by foot versus by mouse click. “When you live in a 1,000-square-foot condo, or an 800-square foot condo, it’s not actually such a bad idea to go downstairs, have sushi for dinner and on the way back pick up a bottle of wine, or some groceries,” he said.

That approach by First Capital (and Gazit Globe) favours a mix of tenants that is heavy on staples of city life: supermarkets, gyms, and personal and health care services.

“The beauty is that we are really the providers of daily necessity items and services; the things that you need whether there’s a recession or whether there’s prosperity,” explained Chaim Katzman, the chairman of First Capital Realty and its parent company Gazit-Globe.

“We don’t shine that much during prosperity. But also we don’t fall into to the doldrums during a recession. That’s the thing that needs to be understood about our business.”