For the last few years, Genesis Land Development Corp. (GDC-T) has been a real estate outfit that seemed to produce almost as many storylines and drama as it did homes. 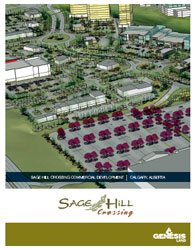 The Calgary-based land developer and residential home builder has gone through a number of senior executives and CEOs, a strategic review of all options including a sale of the company, a shareholder battle and a revolving cast of directors.

Last month, it signalled to investors that it has put all that behind it with the announcement of a $5.4-million special dividend, the first such payout to shareholders in its history.

“Genesis is successfully implementing its strategic plan and, as a result, has experienced a significant turnaround in our business prospects and in our financial situation, with rapidly growing home sales, strong cash flow and a significantly improved balance sheet,” Rudichuk said.

Rudichuk, a 20-year real estate veteran who was appointed CEO of the company in early 2013 to add stability to Genesis, quickly sums up the accomplishments of new management.

“Obviously, that means growing the company, running the company, and communicating those results. We were tasked with creating a strategic plan which was done and approved by the board late in the year and we have been executing on that plan since that time.”

What’s the plan? Simply put, to expand the company’s core operations, improve its balance sheet and grow the Genesis footprint in the Calgary area. Nothing too surprising for a land development company, at least on paper.

So far, so good

By key measures, home building activity, profitability and debt levels, Genesis is on the right track.

In May, Genesis unveiled improving finances with its first-quarter report. (It will release its second-quarter results in a few weeks). The highlights included sharply higher home building activity and revenue and sharply lower debt.

Genesis has been able to pare down its debt, and reward its shareholders, by selling off excess property. In March, it sold a 121.91-acre industrial site located in Parkland county, west of Edmonton, for $14 million.

The Acheson site was deemed a non-core asset because of its location outside of the Calgary Metropolitan Area (CMA) and its industrial zoning. Genesis said it has sold about two-thirds of its non-core land holdings.

Genesis is sticking to its CMA focus, counting on the hot Alberta economy and its healthy bank of land for continued growth. It holds a bank of residential land in Airdrie, northeast Calgary and northwest Calgary.

“We have what I consider to be a great current land base of approved properties in a market that is rising and is constrained from a supply side as a result of public policy and those are strong tailwinds for our operation,” said the company’s CEO.

Genesis has major land holdings in three areas that are sites of present and future residential and mixed-use development:

• Sage Hill Crossing: In the Calgary NW location, it has sold the two commercial sites on the property and completed 75% of the servicing for the entire property. It is revising the master-plan to build the remaining five mixed-use sites;

• NE Calgary: Saddlestone development and North Conrich property, where Genesis has a 51% interest in a 610 acre parcel located at the intersection of Stoney Trail and Airport Trail;

• Airdrie and Airdrie “Fowler”: Genesis has the Canals Landing and Bayside residential projects and a right of first refusal to acquire these lands from a limited partnership which has potential to add as much as 10-15 years of lot deliveries, if acquired. Development is expected to commence in 2020.

Genesis is determined it will do a better job of communicating with investors than it has in the past, a decision that seems to be paying off in terms of its share price.

“We have been a lot more communicative with the marketplace and the investment community and our efforts to make the nature of our operations a lot more transparent so that people could understand us,” said Rudichuk. “I think it has borne some fruit, we have had positive response from the marketplace in terms of our share price.”

Over the past year, Genesis stock has gone from a low of $3.30 to around $4.41 per share currently. Genesis also chopped its long-term debt from north of $50 million to about $33 million at the end of March.

“We have paid down a massive amount of debt,” said Rudichuk. “I think our debt in 2012 was approximately $100 million. So the strength of our balance sheet and our covenant has improved dramatically and our ability to access more competitively priced debt has improved with it.”

The 2013 highlights for Genesis included the $32.5-million sale of a regional shopping centre site within its Sage Hill Crossing project to RioCan, the appointment of Bruce Rudichuk as CEO, along with other executives, and the successful push by its largest shareholder, Smoothwater Capital to direct change at the company.

Last summer, Smoothwater (which owns about 22% of the shares in Genesis) launched a proxy battle with the current board that resulted in a new chair in Stephen J. Griggs, who is part of the Smoothwater investment group.