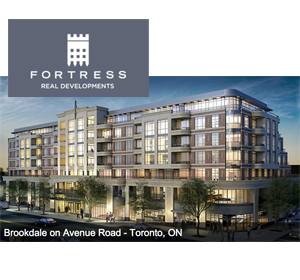 How Fortress got its hands on the coveted one-acre stretch of real estate is an interesting story.  Mady Developments, the former owner and a partner with Fortress on a number of projects, ran into financial trouble recently and the property went into a power of sale.

Taking over the property was not as simple as signing a cheque, however.

“It was left as a huge mess; all the mortgages were in arrears, taxes were unpaid, and there were many registered liens,” explained Fortress president and CEO Jawad Rathore. “But in a matter of weeks we navigated a series of complicated legal manoeuvres and came out on top.”

Fortress was pretty sure it had a winner on its hands during its efforts to win control of the property, dubbed “Brookdale on Avenue Road,” but was reassured by the reception it received in the real estate community after it secured its interest in the site.

“We have been getting a lot of calls ever since we have taken it over by a lot of different companies interested in buying the commercial space,” said Frank Margani, executive vice-president of strategy and development at Fortress.

“We think the commercial space was undervalued by a lot of people and I think we will be proven right because the calls we are getting have been from some pretty big players.”

He added the company will “entertain” those offers but is leaning towards waiting until construction is finished to ultimately decide whether to own or sell.

The Richmond Hill-based company can get to work on the estimated $90-million Brookdale development almost immediately because the property already has approval for 146,917 square feet of residential and another 20,129 square feet at grade commercial.

Development partners Fernbrook Homes and Cityzen Development Group are now on board and Fortress’ biggest decision may prove to be whether to ultimately own or sell the ground level retail.

The Brookdale development partners say 50 per cent of the units are already pre-sold and confidently assert “the rest are expected to move quickly.”

The project also features a number of townhouses on the side street parallel to Avenue Road. Prices range from $400,000 to more than $2 million.

Markham-based Mady Development Corp. found itself in a financial squeeze late last year, which put a number of its projects in question.

The main trigger for its financial difficulties appears to be its $100-million mixed-use Collier Centre development in downtown Barrie. In February, Mady won court protection from creditors to buy it time to work out a deal with creditors.

At the time, company CEO Chuck Mady told the Windsor Star bad weather and higher-than-expected contractor costs were to blame for the financial troubles.

Fortress had three other projects planned in partnership with Mady: it dropped out of a Burlington, Ont., development but is moving ahead without its former partner on projects in Winnipeg and Barrie.

“We saw some financial concerns and we decided to move really quickly and try to make the best of what we can out of some of their assets,” explained Margani.

Still relatively young as a company compared to a 40-year-old entity like Mady Development, Fortress has been able to respond when the opportunity arose.

“We have got an incredible network of contacts, we have a strong financial plan in place and we have a pretty amazing in-house development team.”

“All of that plus our back office staff really stepped up and put a plan in place,” said Margani.

Fortress was founded in 2002 and by 2008 came into its own as “a notable player in the marketplace,” said Margani. “Four years ago, people may not have heard of us; in the last two years, I think every developer in the GTA knows who we are.”

The company currently has 11 projects under construction, mainly in Ontario, but has two developments underway in Regina, Winnipeg, Calgary and Edmonton.

“We’re very active in partnering with other developers,” said Margani.

The developer takes a different approach to projects, depending on the market.