It’s no secret Canadians are becoming less active in religious life, leaving churches and other faith-based structures — along with their properties — less necessary.

Some of these properties are in key locations that offer great opportunities for businesses and great resources for communities and would generate much-needed funding for religious groups.

But, as Ottawa businessman Chris Henderson says, those “doing God’s work on earth” are often uneasy letting go of properties to be repurposed.

“We don’t want to see just every church property just become a condo,” he says. “We don’t think that’s good for the community.

“I have no problem with people being real estate developers; I encourage that,” he says. “But it’s not just sell it and get out of Dodge. I just don’t think that’s particularly innovative. And there are going to be times when that’s going to happen, and it’s up to the faith community to decide what they’re going to do with their money, and that’s their decision, and we would encourage people to use it for their missions. 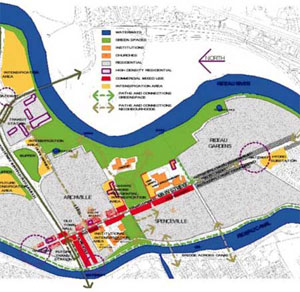 “But I really think the sweet spot here is for developers, community groups and faith communities to be a bit more innovative about thinking about how facilities are redeveloped and reused.”

Henderson, founder of the Delphi Group and president of Lumos Energy, both energy-efficiency consulting firms, is among the organizers of a related all-day workshop at Ottawa’s St. Paul University on Oct. 26 titled “Mission Building.”

“Here’s a huge property, right near downtown, a very resilient neighbourhood,” Henderson says. “What’s that development going to look like?”

The National Household Survey, released by Statistics Canada this year, found that 24 per cent of the population had no religious affiliation in 2011, up from 15 per cent 10 years earlier. Henderson says about 800 branches of the United Church of Canada will have to close within the next decade due to declining attendance.

Henderson was part of a group that recently organized the amalgamation of three United Churches in Ottawa, resulting in the sale of one church property.

That sale, of the Westboro United Church, ended up being a great solution for the buyers, the sellers and the community at large, Henderson says. The buyers were developer Springcress and the organizer of the annual Ottawa Bluesfest.

The church’s heritage features are being preserved while the space is turned into a combination of office space for Bluesfest and community arts space and a housing development is added to the property.

“We had a developer come in, build housing, sell it,” Henderson says. “Bluesfest has come in, created an arts facility for the community. We’ve got money; we’re using it for the community. That’s what we’re trying to foster; more innovative approaches.”

Henderson says buildings such as churches and schools that are deemed redundant often sit on land communities see as their own. To avoid “pushback” from the community on various development ideas, he says all the parties involved need to provide more “innovative” solutions in which a variety of needs — and not just those of the developer — are served. 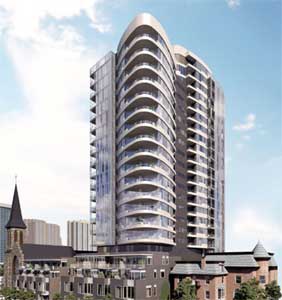 He adds that the religious organizations themselves are often so stressed about the uncertain futures of their properties they delay important decisions that could benefit many.

“We find faith communities wring their hands and go, ‘Oh my gosh. What are we going to do?’ They wait way too long to make decisions. They put it off, and at the 11th hour, it’s a big problem.”

A win-win solution in downtown Ottawa

One church that moved forward with a multi-faceted use of its space that allowed it to stay put while also earning some extra money is the Christ Church Cathedral in downtown Ottawa (Image on left). Rev. Shane Parker and his congregation knew they wanted to remain at the church, which dates back to the 1800s.

But it was also decided that the church could do more to help others if it was able to cash in on some of the surrounding prime real estate property it owned.

“It’s a very good site for a cathedral to be on, but we did have this land and we knew it was an asset that we needed to exploit,” he says.

The church formed a partnership with Windmill Development Group, a company with a strong reputation for sustainability which is creating housing on one side of the cathedral and office space on the other.

There are certain things this Anglican church would not allow on its property, such as a casino, Parker says.

“Most religions have at their heart a concern for the well-being of others, and I would think it’s in that spirit we would want to see the land being used for good purposes,” he says.