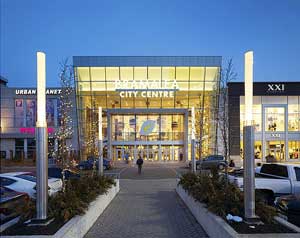 “It’s a huge accomplishment that speaks to the extraordinary strength of the Canadian commercial real estate sector, particularly on the property management side,” said BOMA Canada president and chief executive officer Benjamin Shinewald.

“There’s been a shutout of Canadians for the past few years, so we decided at BOMA Canada to invest in the awards and to encourage our members to go forward to the internationals and to work with them to make sure that they’re putting their best foot forward.

“It paid off in this tremendous success, which I believe is the best night ever for Canadians at the awards.”

This year’s gala marked the inclusion of a retail building TOBY category, an award for which BOMA Canada had pushed. Perhaps appropriately, it went to a Canadian mall: Bramalea City Centre, which is owned and managed by Morguard Investments Ltd.

The TOBY Awards are the commercial real estate industry’s highest recognition honouring excellence in building management and operations in specific categories of building size or type. To win an International TOBY Award, a property must first win both local and regional competitions.

Canadian properties were entered in just eight of 15 TOBY Award categories, meaning Canadian buildings won half of the awards for which they were eligible

“It’s because we have fantastic buildings managed by awesome professionals across Canada,” said Shinewald.

* 500,000 to One Million Square Feet:
20 Queen Street West, which is located at 20 Queen St. W. in Toronto, owned by ONTREA Inc. and managed by Cadillac Fairview Corporation Ltd.

Several dozen Canadians attended the conference, and about 1,000 people were at the TOBY Awards ceremony.

A reception co-hosted by BOMA Canada and BOMA Toronto was held before the awards dinner and featured Canadian consul general in Los Angeles James Villeneuve offering greetings on behalf of Canada and discussing Canadian business and diplomacy in southern California.

“It’s a place to go to recharge and see what’s coming down the pipe.”

BOMA Canada TOBY Awards will be presented as part of BOMEX 2015, scheduled for Quebec City from Sept. 15 to 17. Winners will go on to compete at the 2016 BOMA International Conference in Washington planned for June 26 to 28.