The Greater Toronto chapter of the Commercial Real Estate Development Association (NAIOP) will honour four individuals for their contributions to the industry at the 14th annual NAIOP Real Estate Excellence (REX) Awards on April 15 at the Metro Toronto Convention Centre. 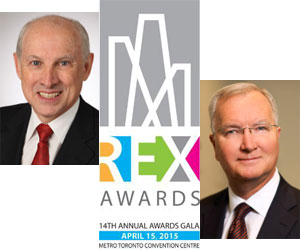 “The award winners this year demonstrate a wealth of achievement and experience that is hard to match,” Craig Smith, president of the NAIOP Greater Toronto chapter and Ashlar Urban Realty Inc., said in a statement. “They are not only leaders in the industry, but they make tremendous contributions to their communities and we are pleased to recognize their great accomplishments.”

☛ O’Bryan is honorary chairman of CBRE Limited, which he joined in 2008 after serving as managing director at TD Securities from 1998 to 2008. He has more than 40 years of experience in the real estate industry, and his accomplishments include selling in excess of $8 billion worth of commercial real estate across Canada and negotiating more than four million square feet of leases for major Canadian companies and institutions. O’Bryan holds an honours degree in estate management and is a member of the Royal Institution of Chartered Surveyors. (On the left in the image.)

☛ Morse is the former chief executive officer of the Real Property Association of Canada (REALpac) and former senior managing director of office leasing at Cushman & Wakefield. He was president of the NAIOP Greater Toronto chapter in 2003 and was a contributing volunteer to the association for many years, including two as chair of the REX Awards advisory committee. He was instrumental in establishing the criteria for the office, industrial and investment team awards, oversaw the selection of the finalists and ensured the transparency and integrity of the awards process. (On the right in the image.)

☛ Hoffman is founder and president of CentreCourt Developments, a real estate development company focused on developing high-rise condominiums in Toronto. During his 25-plus years in the development industry, he’s been involved in some of the city’s major residential, office, industrial and mixed-use projects. Hoffman was chief operating officer of Menkes Developments Ltd. before starting his own company.

Reale and Hoffman contribute much personal time to a number of community organizations, including the Hold’em for Life Charity Challenge, which they co-founded in 2006. It has since raised more than $18 million for cancer research and other worthwhile charitable initiatives.

The REX Awards will also recognize ”’Best of the Year” teams in seven categories and a developing leader (under-35) recipient along with the four honourees.