There’s a familiar sports cliché Daniel Fournier likes to use when describing his vision for Ivanhoe Cambridge in his role as the massive commercial real estate investment firm’s chairman and CEO. 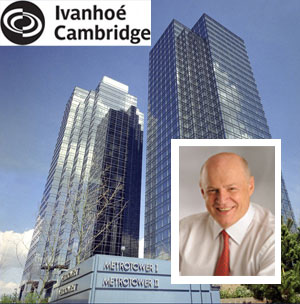 “Go big or go home,” Fournier says more than once during Wednesday’s interview in a seventh-floor suite of the 75-year-old Fairmont Hotel Vancouver — a masterpiece Ivanhoe Cambridge is currently shopping as part of an ongoing shift toward tightening its grasp on high-profile shopping centres and office tower buildings.

Fournier would repeat the phrase again downstairs in a keynote address to the Vancouver Board of Trade. He comes by the sports lingo honestly. Fournier, who took over the multi-billion dollar reins of Ivanhoe Cambridge in 2010, took a break from his studies at Oxford in 1977 to play a season for the CFL’s Ottawa Rough Riders.

Fournier said he came to the West Coast partly to say “thank you to Vancouver, because we’ve done very, very well here,” but also to share insight on how he plans to transform Ivanhoe Cambridge from a real estate investment machine with $40 billion in assets, into a $60-billion behemoth.

Ivanhoe Cambridge, the real estate arm of Caisse de depot et placement du Quebec, has sunk roughly $5 billion into B.C.’s Lower Mainland market, increasingly gobbling up flagship shopping centres in Greater Vancouver cities such as Surrey, Burnaby and Richmond, as well as in Vancouver itself. They’ve also plunged deep roots into Vancouver’s office tower market. In all, their Greater Vancouver investments represent about 13 per cent of their total portfolio.

The crown jewel is Metropolis at Metrotown in Burnaby, a shopping mall that sees more than 30 million shoppers each year.

“It’s the single most valuable asset in our entire portfolio. It’s a fortress,” Fournier said. “If we had 10 of them in the world, we’d be thrilled.”

When Fournier says “go big, or go home,” he’s referring to their strategy in Montreal and Vancouver, where they’ve systematically shed hotels and smaller shopping centres over the last few years to free up capital to invest heavily in major shopping centres and office towers. Nearly 48 per cent of their $40-billion portfolio is in Canadian assets, with 29% of that in Quebec and B.C.

About 39 per cent of their worldwide portfolio is tied up in shopping centres, and another 32 per cent in office buildings. Their hotel business is at only 4.4 per cent, and dropping.

In the interview and at the microphone, Fournier says things like “critical mass” and “platform building.” By investing heavily in key metropolitan cities such as Vancouver, Montreal, New York, Paris and Seattle, Ivanhoe Cambridge and its 1,700 employees are developing local expertise while building relationships with developers, real estate brokerages and civic governments.

“We’re not doing one-off investments anywhere,” he said, admitting that earlier single-investment forays into the U.S office market and the European retail market cost the company heavily and bled it of capital that could be used to fortress themselves into familiar cosmopolitan markets.

“We’re targeting 15 cities around the world. It’s a city strategy, not a country strategy,” he said. “We’re really investing in London, and not necessarily the U.K. People say France is going through a really tough time, and it is, but Paris is still Paris.”

Just last week, Ivanhoe Cambridge inked deals to buy two adjoining office properties in downtown Seattle for about US$280 million. “So now, we’re up to 13 per cent of the office space market in Seattle,” he said.

In Vancouver, the company deepened its commitment to shopping centres by breaking ground earlier this year on a new 1.2-million-square-foot shopping centre in Tsawwassen, just a short drive south of Vancouver, near the U.S. border.

Slated to open for what Fournier expects will be mostly a tourist clientele, Tsawwassen Mills is a $600-million project on land leased from the Tsawwassen First Nation. Fournier calls it the first deal of its kind in the Ivanhoe Cambridge portfolio.

In March, Vancouver City Council approved a rezoning application by Ivanhoe Cambridge and Westbank Development for an unprecedented $1.3 billion redevelopment of Oakridge Centre, which will see the amount of mall’s retail space doubled, as well as the construction of more than a dozen residential and office towers, ranging from nine to 44 storeys.

The decision was made to shift away from hotels around the same time Fourier took the company helm. “We just sort of decided four years ago we can’t be all things to all people,” he said. “We can’t be in all those asset classes, and so we just said this is probably the asset class that we know the least, along with retirement homes. There’s nothing wrong with (hotels); it’s just that they don’t suit our particular expertise.”

Ivanhoe Cambridge once owned about 60 hotels but is now down to six, including the Hotel Vancouver. “We’ll recycle the capital into the stuff we know,” he said, adding later in front of Vancouver’s business elite that he expects their portfolio to climb to $60 billion in global assets.

“I love heritage properties, myself, but when you see machines like Metrotown, and 30 million people going through there a year, you sort of say, ‘Boy, this is an asset that we want to own for a very long time.’ ”