Montreal-based Fronsac Real Estate Investment Trust (GAZ.UN-X) has made its first acquisition outside of Quebec, purchasing a property with an operating Burger King restaurant in Cornwall, Ont., as it sets out on what should be a busy 2015. 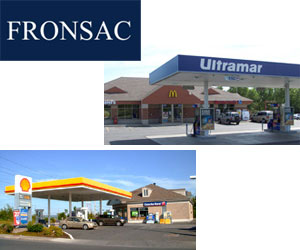 “We have about $20 million worth of property on our table as of now and we should be able to do other deals before the end of the year,” said Fronsac president and chief executive officer Michel Lassonde.

The recently purchased Cornwall property cost Fronsac $815,000. The Burger King restaurant is under a triple-net lease of $60,000 per year, expiring in 2017 (plus a percentage of sales made by the store). A Canadian chartered bank has extended a first mortgage of $500,000 for the transaction.

“We like to buy those spots because the government won’t change the highways anytime soon,” said Lassonde. “From a real estate point of view, they’re very good locations.”

Fronsac prides itself on having its properties completely leased and and not losing a cent in missed rent payments, owing to the quality and reliability of its tenants. The REIT, which was formed in 2006 and trades on the Toronto Venture Exchange, only purchases properties that don’t require management or administration.

“The only thing we have to do is check our bank account at the first of the month to make sure that the lease has been paid,” said Lassonde. “There are no calls to see if the guy has done the snow shoveling or things like that.”

This most recent purchase follows two made in December by the wholly owned subsidiary, SEC Fronsac Quebec Levis. That $3.87-million transaction brought a property with a freestanding Tim Hortons outlet in Levis and another with an Ultramar gas station and convenience store in Quebec City into the fold.

At the same time, Fronsac announced the sale of a St-Hubert property for $2.02 million. It was acquired in 2012 for $1.95 million. The REIT has no plans to dispose of anything else from its portfolio of 10 properties valued at $20.09 million as of September 2014.

“What we have now is prime real estate, so there’s no way we’re going to sell anything at this point in time,” said Lassonde.

“We’re very conservative and for a small REIT, I think we’re doing a good job. My personal goal is to get to $100 million worth of properties within the next four or five years, and so far so good.”

Fronsac finds itself in a favourable position for growth, with low interest rates making borrowing relatively pain-free and a niche that sees it without a lot of competitors.

“It’s a good market for us because we’re acting as consolidators,” said Lassonde.

“The prices of the properties we’re buying are usually between $3 million and $5 million, and the big guys are not interested at all in those types of properties. There aren’t many people who can put up that kind of money, so sellers have to look at guys like us to unload their properties.”