A fund run by Quebec’s largest labour union has quietly become a major player in the province’s real estate scene and has done so through the use of an investment model that is unique to the industry. 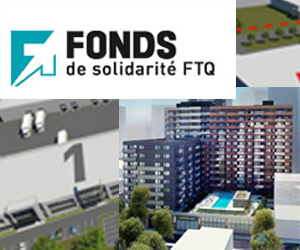 Created in 1991, the Fonds immobilier de solidarité FTQ real estate fund currently has investments in 30 projects under development with a value of $1.6 billion. It’s a subsidiary of the Fonds de solidarité FTQ, a capital development fund formed in 1983 with the aim of contributing to economic growth and employment in Quebec.

As of the end of May, the Fonds de solidarité FTQ – operated by the Fédération des travailleurs du Québec (Quebec Federation of Labour) – had $10.1 billion of assets, about five per cent of which were in real estate.

For example, on a $10-million project, $6 million in funding will come from banks, while the remaining $4 million is split equally between the Fonds and the developer.  “There aren’t too many competitors for this financing model,” Bélanger says.

Normally, “banks won’t pay more than 60%, leaving the developer to pay the rest,” he says. But “we take the risks along with the developers.” With the Fonds’ involvement, developers only have to come up with 20% of the costs instead of 40%.

“The advantage for a partner is liquidity,” Bélanger says. As well, developers benefit by obtaining access to the expertise of the real estate fund’s 32 employees, from architects and appraisers to management and financial people.

For banks, meanwhile, “it’s reassuring to know the Fonds is there because we have a reputation of completing the projects we invest in.”

Start at the design stage

The Fonds injects capital into development projects as early as the design stage and profits by planning a five-to-seven-year exit horizon, depending on the economic picture. For condo projects, the exit is much faster and is dependent on sales.

The Fonds currently has investments in 4,000 condo units being built across Quebec.

One such endeavour is Bassins du Havre, a condominium project on the Lachine Canal, with150 units in its first two towers. It’s being built with partners Prével, Rachel Julien and Claridge. It is also heavily involved in Devimco’s District Griffin project in the Griffintown area.

The Fonds also has a piece of the Tour des Canadiens, a 50-storey, 555-unit condo tower under development by partners Canderel, Cadillac Fairview and the NHL’s Montreal Canadiens. It will be integrated into the Bell Centre and is the Montreal equivalent of Toronto’s Maple Leaf Square Condos.

The Fonds also just announced its involvement in Urbania 2, a condominium project near a metro station in Laval that could see as many as six towers. The first 16-storey building will cost an estimated $51 million.

On the commercial front, an office development with Canderelis planned for the Quartier des Spectacles, Montreal’s entertainment district. A start date has not been announced.

And on the industrial scene, the Fonds is involved with Cosoltec in Industria, 1.5-million-square-foot industrial park in Laval.

Earlier, the Fonds was involved in the launch of Cominar, Quebec’s first REIT and with Hydro-Quebec and Desjardins in Technoparc St. Laurent, Quebec’s first technology park.

An affordable housing component has been added to the Fonds in recent years and $53 million is now devoted to affordable and social housing. This includes transformation of the former Bellechasse hospital in Montreal into a residence with 91 social and community housing units.

The Fonds recently began investing in residential rental units, a sector that has seen little growth in recent years as the focus was put instead on condos.

Bélanger says there are people living outside Montreal who want to live in the city but don’t want to spend $300,000 or $400,000 on a condo. However, “people are ready to pay more” to rent a condo-style apartment for $1,200 or so monthly and maintain their liquidity.

Since Montreal is a university town, the Fonds is also examining the potential of developing student housing near universities or metro stations.

While the fund initially concentrated almost entirely on the Montreal and Quebec City regions, it is now active in all regions, Bélanger says. It recently announced its involvement in Plateau Sabourin, a housing development in Val-d’Or with two 15-unit buildings.

Projects outside Quebec are also possible. The Fonds has invested in Hôtel Le Germain Calgary, a hotel and mixed-use project on Centre St. in downtown Calgary. An Ottawa area project is also on the horizon but it’s too soon to provide details, Bélanger says.

“When we do things outside Quebec, we have an obligation that there be an economic impact in Quebec,” to fulfill the Fonds’ regulations. “So if I invest $5 million in a project in Ottawa, there has to be a $5-million economic impact for Quebec.” This, he says, can be in the form of products, services or materials.

While the returns of the real estate fund are not divulged, Bélanger says they have been positive since the fund’s formation. Overall, however, the 614,000 shareholders of Fonds de solidarité FTQ saw an 8.3% return in its last 12-month period.

“We think Quebec is an under-estimated market,” says Bélanger, an optimist about the province’s real estate future.