Halifax’s residential market may be sluggish at the moment, but that isn’t stopping developer WM Fares from steaming ahead with a number of new projects. They include a 66-acre land development as well as a several new buildings. 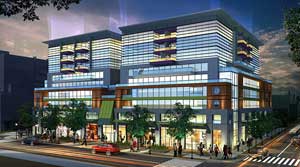 Vice-president of operations Maurice Fares, who says his company is building for the  future, is the first to acknowledge the port city’s residential market is “soft” and “very slow.”

But Fares notes he doesn’t expect things to remain that way and when the market does come back to life and people again start buying, developers need to be ready to take advantage with condos on the market.

The developer pointed out the benefit for some of the larger companies is they can afford to build and then sit on their investments.

“We’re seeing a lot of condo development and from our point of view, it’s a strategic play,” Fares says. “You can’t be reactive.”

Certainly no one’s going to call WM Fares reactive. The company is currently on a development streak, adding to its Halifax portfolio of more than 200,000 square feet of commercial space and some 800 residential units.

Working with the Halifax-based Banc Group of Companies, WM Fares is building two twin  buildings, the Mary Ann and the Margaretta. Both will be nine storeys and will be located centrally near one of Halifax’s main shopping strips, Spring Garden Road, and the new public library.

The buildings are replacing a couple of asphalt parking lots. “These will be a great addition to the City of Halifax,” notes Cesar Salah, WM Fares’ vice-president of planning and design.

Both buildings will also have three levels of underground parking. The Mary Ann is well underway, while the Margaretta is scheduled to begin construction in 2015.

A much larger project for WM Fares is the 66-acre Rockingham South development, which is close to Southwest Properties’ 63-acre Seton Ridge development. Fares says the company hopes to break ground for the project in September. (Southwest Properties banking on downtown Halifax, Property Biz Canada, Aug. 28, 2014)

The development will consist of 12 multi-unit buildings, 46 single-family homes and close to 90 townhouses. Fares provided an estimate of up to 10 years for the build-out.

More recently, WM Fares opened St. Lawrence Place in the spring. The 13-storey building features five levels of condos for rental on the bottom half, while the floors above are condos for sale.

A separate building near the Bayers Road shopping district, adjacent to and part of the St. Lawrence Place development, contains 7,500 sq. ft. of retail space and four floors of class-A office space.

Wadih Fares, Maurice’s father, founded the company in 1983. Fares says his father began on his own, developing small four- and-six-unit buildings and homes for clients around Halifax.

Fares’ father soon realized that builders and others in the industry could benefit from having someone obtain building permits, develop buildings and perform all of the administrative duties. The company took off soon after.

Today, the WM Fares Group offers everything from architecture and engineering and construction management to development and property management.

Standing behind the brand

Fares said what’s important to the company today is standing behind the brand and the units that are built and sold.

“If you’re dealing with a client, you’re taking care of the client all the way. At the end of the day, in a market that’s as tight as it is now, you have to be very open to helping clients and managing and being there for them as opposed to walking away once you sell a house.”

Fares said while opportunity exists across the country, Halifax is the firm’s home and where they are committed to building. Like many developers, he sees the potential in the region’s nascent shipyard building and offshore oil and gas industries.

“We’re fully committed to the next chapter,” Fares says. “We’re looking forward to working with all the people involved to make this a successful economy. I think it’s more about collaboration and less about competition.”