A TransLink owned property in Vancouver is at the centre of a controversy that will see a “cash-strapped” transit authority face off against area residents.

The Oakridge Transit Centre (OTC) is a 14-acre site located on the same block as the Oakridge Mall which recently received City of Vancouver approval for a massive new development. 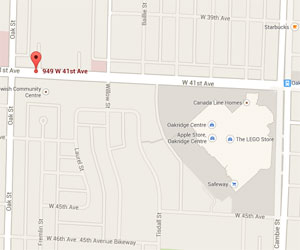 The shopping centre development will be comprised of 14 new high rises ranging from nine to 44 storeys and is expected to support 5,000 new jobs and provide $228 million in new community amenities according to a Global News report .

TransLink is now weighing its options on the future of the transit centre which is currently zoned for single family homes and occupies a block  from 37th to 41st and from Willow to Oak Street. The potential for the property to be intensified has morphed it into a prime development site.

The City of Vancouver and TransLink have launched a policy review and public consultation to determine the future of the property. Local residents are fearful their primarily low-rise neighbourhood may change dramatically as a consequence.

While denying that the Transit Centre is for sale, Derrick Chung, TransLink‘s VP of strategic sourcing and real estate, said the corporation responsible for regional transportation within Metro Vancouver is working closely with the city and public stakeholders to develop a policy statement for the property. That process is expected to take about a year and is intended to provide a vision for the larger community.

“Developing the land into residential lots is an option, but not one that would provide the best return or value,” Chung said. “With a more certain vision for the community, we believe the property will have more value than the last assessed value of $72 million in 2013.”

The property could now sell for as much as $220 million according to a Global News report.

Chung added that TransLink “will explore all opportunities to generate revenue once the policy statement is approved. This goes beyond making a sale; it could include leasing the property or partnering with developers. Revenues generated will be reinvested into the transit network.”

The former army barracks site has been owned by TransLink since 1948. In its prime, it housed 244 trolley buses, 182 diesel units and more than 1,200 staff including drivers, mechanics and administrators.

“Oakridge Transit Centre is currently used for the repairs and maintenance work for trolley line buses and housing decommissioned vehicles. Once these services are moved to the more modern and efficient Hamilton and Burnaby Transit centres in winter 2016, the property at 949 West 41st Avenue will no longer be necessary,” Chung said, adding TransLink’s commitment to running an efficient operation means minimizing surplus properties that don’t add value to the company’s transit operations.

In preparation for what is to come, TransLink completed some site remediation in 2012 but, “We are now going back, completing a more thorough investigation of the entire site which has been underway since March 2014. TL (TransLink) is working towards a certificate of compliance in 2015,” he said.

Public has say at open houses

Open houses at Vancouver’s Van Dusen Gardens – including one on Thursday night – provided an opportunity for the public to ask questions and provide input into development plans for the site. A questionnaire inviting comment is open until July 3.

The City of Vancouver’s website said the policy statement would “guide future redevelopment of the site near West 41st Avenue and Oak Street” including setting out the principles and objectives for land use, sustainability, density, and building types and heights.

The city has suggested a number of existing policies will help guide development of the OTC property including its Rezoning Policy for Sustainable Large Developments (2013), the Greenest City 2020 Action Plan (2012)c and the Oakridge Langara Policy Statement (1995) .

The Vancouver Sun also reported that staff said the 1995 Oakridge Langara Policy Statement “is not likely to meet the urban potential the city has been striving for in locations well served by transit and accessible to urban amenities and employment.”

According to the Rezoning Policy for Sustainable Large Developments, “these heights/densities will be used as the base case option when an actual site planning/ rezoning process occurs. Additional options with increased densities and corresponding heights beyond the Plan or Vision may also be created and assessed through the rezoning review and planning process that accompanies re-zonings of this scale” which include public engagement.