Gastown to get first new office building in decades

Delta’s Century Group is making news with plans for a new redevelopment in the B.C. city’s trendy Gastown district, but it’s far from the only project the energetic developer has on the go. 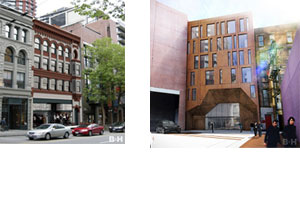 In late March, the media gushed about Ormidale Block, a mixed-use office and retail building Century Group is building in Gastown. Century Group is working with B+H Architects, who plan to seamlessly combine the fully restored heritage façade with a new building in place behind it.

“Gastown renewal project fuses heritage with hip,” The Globe and Mail reported, while Business In Vancouver noted the class-A building will be Gastown’s first new office redevelopment in decades.

Not much doubt exists that the Ormidale Block is a pretty sweet redevelopment: the building will have a 4,800-square-foot green rooftop deck, indoor and outdoor bike racks, showers, lockers and electric bike plug-ins.

Slated for completion in spring 2015, the building will also include a state-of-the-art HVAC system and will be a five-minute walk to downtown Vancouver’s Waterfront Station transit hub.

Originally designed by George W. Grant in 1900, the finished building will have 39,500 sq. ft. of space, according to Business in Vancouver. The Globe reported that the Century Group acquired the building for $7 million and has $11 million set aside for redevelopment.

While the Ormidale Block has been grabbing the headlines recently, it’s relatively small compared to some of Century Group’s other projects. The company is behind Surrey’s 3 Civic Plaza, a 52-storey building that will be the tallest tower south of the Fraser River.

The building will have 353 residential units, a 144-room hotel, five floors of office space, 13,700 sq. ft. of commercial space and a rooftop garden. The building is scheduled for completion in late 2015/early 2016 and, according to The Vancouver Sun, carries a $150-million price tag.

A second Surrey development Century Group has underway is Citypoint, 21- and 25-storey towers which will be LEED Silver certified.

Then, there’s Northgate, a mixed-use development that will feature townhomes, offices and seniors’ residences. Along with the 41 homes, a five-storey office building will contain retail units on the bottom level. The Offices at Northgate will represent Tsawwassen’s first concrete building and the first class-A office building in South Delta.

The development will also feature a number of green initiatives such as a rainwater reclamation system, a green roof on the office building, and community gardens.

Century Group was founded in Tsawwassen in 1957 by Irish immigrant George Hodgins. Hodgins, who was specializing in West Vancouver real estate, realized the opening of the Massey Tunnel in 1959 to service a new ferry terminal in Tsawwassen would create opportunities and he began his development career building lots in the area.

Sean Hodgins is the firm’s current president, having taken over from his father George in 2006. On the company website, he says his approach to development is to “build neighbourhoods and public spaces where people can access jobs, transportation options and local amenities conveniently . . .”