While it is a tough time to be operating in Alberta, Genesis Land Development Corp. is thriving in the “most constrained market in over a decade.” 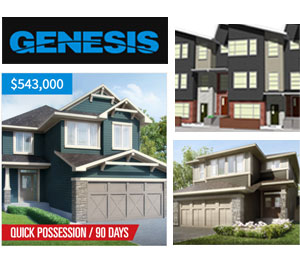 The Calgary-based residential land and home developer (GDC-T) is currently building in five phases in three communities in what is generally a tough residential market.

“We are in an extremely land-constrained, or approvals-constrained environment, which is causing constraints in supply,” said Genesis president/CEO Bruce Rudichuk. “So values are holding up and we are selling homes and selling land.”

That was reflected in recently released nine-month results for Genesis which illustrated the mixed impacts of a “tentative but relatively healthy,” market for housing and land  and “good supply and demand balance” in the Calgary market area.

Operating earnings were down about 10 per cent for the nine months reflecting a slow pace of Calgary home building and land sales which isn’t too surprising given the plunge in crude prices.

“Our margins from an operating perspective were actually quite stable,” said the Genesis chief.

The home building side of its business performed well while the land development segment generated lower than normal revenue for the first nine months of the year.

The land divisions performance was “due to the market downturn, the timing of release for sale of new development phases and, consistent with the corporation’s strategy, to reserve a significant portion of the developed lots for our home building business segment.”

Genesis said its home building revenues for the first nine months were up by 15.5% while gross margin percentage increased to 17.5% from 17.0% for the same period a year ago. Meanwhile, profit before taxes rose by 55.7% to $5.1 million for the three quarters from $3.3 million the prior year.

“We have got to be really strict in terms of managing our costs,” said Rudichuk. “We do that in terms of our hiring and trying to gain whatever efficiencies we can through the production process as well as with our trade partners,” who are being asked for price reductions.

“They get it, we have a pretty excellent team of trade partners and they want to keep working.”

Genesis had its best quarter for building in the first quarter of 2014, when it built 100 homes. Since that time, buyers’ habits have changed, with far fewer purchasers willing to take the chance of owning two homes in a falling or sideways market.

That has hit pre-order sales, forcing the company to alter its production strategy to build a number of spec homes with staggered completion dates “so that we can still capture as much of that kind of (last-minute) buying market as possible,” explained the Genesis chief.

“So what that does is allow us to open up the window between the sales date and the closing date so that we can sell later into 2016 and still garner the revenue in the closing in 2016 versus the pre-sale model where we would have to be done by April.”

So far this year the Calgary company has delivered 158 homes and has a target of 200 home closings for 2015.

Genesis also sits on a “tremendous land bank” in the form of a large portfolio of entitled residential and mixed-use land that is generally ready for development when the Alberta economy turns.

“So we are in, I would argue, one of the best positions in the city amongst the developers,” said Rudichuk. “We have got approvals but you still have to do your engineering and you have got to service it. But we try to be a little ahead of the curve so we always have a lot of supply available.”

Noting that even servicing land for development represents an investment and potential risk, Rudichuk expects the 2016 servicing expenditures to be less than this year’s, “just reflecting the market and where we think things are going to go.”