PanAm village apartment to be repurposed as student housing

When it comes to Toronto’s developing Canary District, there’s plenty to Chirp about these days.

Eight new buildings are being constructed on the once-derelict, 35-acre West Don Lands. These will form the athletes’ village for more than 10,000 competitors from 21 countries during the 2015 Pan/Parapan American Games. 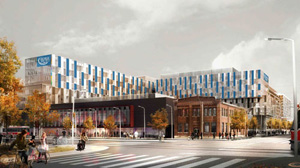 When the games end, Toronto will find itself with a large, new urban village consisting of condos, affordable rental housing, a new YMCA, and student housing – all built to LEED Gold standards.

After the PanAm Games

The latter building will be George Brown College’s first student residence, set to open in 2016. The eight-storey 500-bed, accessible facility structure is being built to the college’s specifications.

Located on the northeast corner of Front and Cherry Streets, the residence will be accessible to both George Brown’s St. James and Waterfront campuses. The two-bedroom units will have kitchenettes and washrooms, while common rooms and study spaces will feature state-of-the-art telecommunications.

Other features will include a card access security system, and extensive bicycle storage.

The new 175,000-square-foot building will help George Brown accommodate growing student demand, according to a Government of Ontario fact sheet on the project. Over the past seven years, student applications to the college have increased by 50 per cent and student enrollment by 70 per cent.

George Brown president Ann Sado told The Toronto Star’s Christopher Hume that Infrastructure Ontario approached the school about partaking in the Canary District development. “We also have an exceptional relationship with Waterfront Toronto. We have worked very closely with them,” Sado said in the Star story.

The idea for the school residence came from Waterfront Toronto, while Infrastructure Ontario is handling the building’s construction, according to the Star.

The $514-million Canary District is a co-development of Dundee Realty Corp. and Kilmer Van Nostrand Co.  Toronto’s architectsAlliance is part of the consortium of village architects, along with KPMB Architects, Daust Lestage Inc. and MacLennan Jaunkalns Miller Architects.

On its website, architectsAlliance says the new community reads like an established neighbourhood with mid-rise courtyard buildings with setbacks, and high levels of sustainability.

“The confluence of diverse architectural expression, ample retail, restaurants and local services and an abundance of green space creates a rich response to advance the West Don Lands vision of transforming the industrial site into a vibrant, sustainable, mixed-use community,” says the website.

Once the residence opens, the students should have access to plenty of varied, interesting retail as well. “Don’t expect a lot of your standard retail fare here,” Dundee Kilmer Development’s president Jason Lester said on the district’s blog.

According to Lester, health and wellness will be a major focus, with yoga studios, health food stores, cafes and restaurants.

The site also has three heritage buildings  being integrated into the community. One, the century-old Foundry Building, offers plenty of light and open space and could possibly make a an ideal gallery or market, according to the blog.