Google rumoured to be leasing Kitchener brick and beam 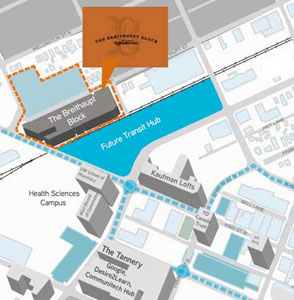 Class-I space is red-hot in Kitchener, Ont., particularly following news Google may have rented space in the area.

“Google has reportedly leased the remainder of the brick and beam space at Breithaupt Block,” according to a recent Cushman & Wakefield news release.

The Breithaupt Block contains 176,000 square feet of urban office space. Perimeter Development won an award in November for its “rehabilitation and adaptive reuse” of the early 20th-century industry building that was once home to a rubber factory.

Although it remains to be confirmed that Google has leased the building, there’s no question such class-I (renovated industrial) buildings are viewed as very desirable.

Firms staying away from traditional towers

In fact, according to Cushman & Wakefield, many firms won’t even consider leasing space in the traditional, 30 to 40 year old office towers that once made up the sole inventory of downtown office space prior to the more recent conversion of brick and beam buildings.

The real estate firm says the office towers of the 1970s and ’80s lack the character and amenities high-tech firms want in their spaces. These include collaborative common areas and sustainable features such as bike lockers and proactive energy management.

The older office towers also often come with a higher occupancy cost than the renovated brick and beam structures due to inefficient building systems and higher repair and replacement costs due to their aging.

“They’re looking for funky space that encourages their employees to spend more time in the office, increasing both productivity and workplace enjoyment,” Bach said.

The desire for class-I space has led to a divided office market in downtown Kitchener, with two sets of office buildings, two sets of rates and two sets of clientele. In spite of a regional vacancy rate of more than 15 per cent, many companies are finding it hard to secure space that meets their needs.

With the Breithhaupt Block no longer on the market, Cushman & Wakefield reports Kitchener’s Innovation Area has the second-lowest office vacancy rate in the region.

Cushman & Wakefield forecast that over the next two years the gap between the two markets, older office towers and brick and beam, will become even more pronounced. And while the real estate agency expects overall office space demand to remain steady, class-I space will command more interest with the growth of the tech sector.

The instability around Blackberry, which is not only one of the area’s largest employers but also occupies close to 1.7 million  square feet in Waterloo, has impacted the market. However, that loss will be offset by Motorola and Square opening offices in the Innovation District.

Cushman & Wakefield said depending on how the Blackberry assets are disposed of, short-term office demand could soften, but the local economy is expected to remain stable and even strengthen as the Canadian economy gains momentum in the latter half of 2014.