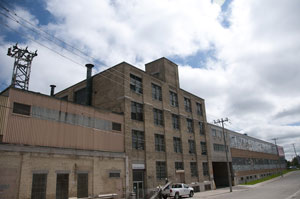 The region greeted with relief the recent confirmation Google was going to occupy the city’s Breithaupt Block after BlackBerry announced last month it was selling off the bulk of its area real estate.

“We’ve been hammered a lot with negative news with what’s going on with Blackberry,” John Lind, a senior sales representative with Colliers International, told Property Biz Canada. But he said Google’s lease reinforces there is still much interest in the region.

“To make a commitment like that, that’s just enormous. It will have a long-term impact and it’s good for the community,” Lind said.

“Google’s office expansion in downtown Kitchener will have an incredibly positive ripple effect throughout the entire region.”

Google’s lease for 185,000 square feet in the bricks-and-beam property marks one of Waterloo Region’s largest office transactions. Lind said the move is a pure expansion and that Google has not put any space up for sublet and still has time on its lease in its current location.

The California-based search engine company entered the Kitchener market in 2011, leasing some 34,000 sq. ft. of space in the Tannery Building around the corner from their new location.

Originally attracted to the region because of the acquisition of a mobile technology company, Google’s presence has become vital with the Kitchener-Waterloo team  having almost single-handedly developed the Chrome browser, according to The Globe and Mail.

“Google is cutting-edge when it comes to developing office locations and even the physical offices themselves,” Lind said. “They’ve come up with some fantastic designs and ideas. In their current location, the big wow factor was when they moved in – they had a slide between two floors.”

Whether Google will do something as wild with the Breithaupt Block remains to be seen. However, the company does plan to build an additional two-storey building on the property with a completion date of spring 2016.

Just five years ago, the property that now houses one of the world’s leading high-tech companies held an auto parts manufacturer. Allied Properties Real Estate Investment Trust and Perimeter Development are co-owners of the property.

The development of the property is a success story for everyone involved. Perimeter won an award in November for the redevelopment of the building and Allied has shown itself particularly adept at finding, acquiring and refurbishing light industrial buildings in urban cores.

The REIT has amassed one of the largest national portfolios of class-I space.

Lind said with the battle for recruitment and retention of employees ongoing, it is “brilliant” Google flipped the idea of trying to attract talent to California. “They just landed a nice office here in Kitchener-Waterloo and they will cater to the brains and the talent here.”