Google technology might be future of real estate marketing 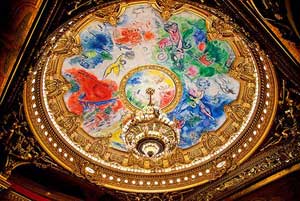 This morning I was very lucky to have a tour of the Google Cultural Institute Lab and Offices in Paris.

How this came about is too complicated to describe here, but I saw two very interesting things that made my marketing brain kick into high gear.

The Google Cultural Institute (GCI) is a non-profit division of Google that helps cultural institutions such as museums and art galleries use technology, and sometimes even invents technology to help them solve specific problems. When you’re Google, you can devote resources to these kinds of things. Good on them.

GCI has partnered with cultural organizations around the world to capture super-duper-uber-high resolution images of important stuff like the Chagall painting on the ceiling of the Paris Opera House (pictured above). In the GCI Lab, and online here, you can choose the thing you want to look at and zoom into a mind-blowing level of detail.

That Chagall ceiling? Until now, people have only seen it from the floor of the opera house, because it’s way up there. Except for Chagall, of course, while he was up on a scaffold painting it, no one has been able to see individual brush strokes or details that have remained a secret.

For example, Chagall’s son came to see the high-res images and was shocked to see a tiny family grouping tucked into a corner that included his dad and himself as a baby in his mother’s arms. He had no idea it was there.

Now, at the risk of offending those who wonder why everything has to be about making money, imagine this technology applied to architecture or real estate renderings or car interiors or neighbourhoods. Anything at all, anywhere, could be examined in exquisite detail any time from the comfort of your laptop.

It’s called Google Cardboard and it’s been around for a year or two, so I might just be late to the party, but it was new to me.

For a couple of bucks you get this flat-packed cardboard thingy that you fold into something that resembles a pair of boxy binoculars. Those of you old enough might remember a toy called a Viewmaster . . . it’s kind of like that.

Once you have the thing assembled with a few deft tucks and sticky strips, you slide your smartphone into it. First you download the free app, of course, because, say it with me: “There’s an app for that.”

Now you look through the device and you’re suddenly on a virtual reality tour of wherever you choose from the app. This morning at Google I was virtually touring the gardens of Versailles. As I swiveled around in the Google offices, what I was seeing through Google Cardboard showed me the corresponding view in Louis XIV’s gardens.

We’ve all heard of or even tried out virtual reality technology before, but Google Cardboard is so easy and cheap and Luddite-proof. They’re giving the devices to programmers to write code for, and even making the video technology to capture the tours available so more places can be recorded.

One day we’ll be able to put these two technologies together, walk around somewhere virtually, and then zoom into microscopic detail on whatever you choose to examine more closely.

And who knows what else these GCI non-profit explorations might lead to for the world of culture, and for the rest of the world, too.