The high absorption of industrial space in the Greater Toronto Area (GTA) stretched into the third quarter and seems poised to continue, according to a new Colliers International report. 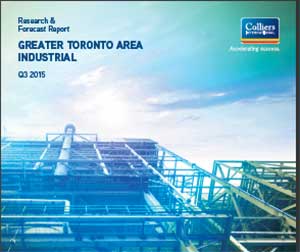 “The momentum of our leasing market is strong, with record high lease rates and low vacancy rates,” said Colliers business development vice-president Peter Garrigan. “Speculative construction continues to be built and leased, and there’s a long list of occupiers still on the street searching for space.”

The asking net rental rate inched up to $5.21 per square foot from $5.19 in the previous quarter, and signs point toward continuing steady increases due to higher-quality product and moderate demand.

Low vacancy rates have also contributed to the average days on the market for properties decreasing in most GTA sub-markets.

Availability rate dropped to 3.1 per cent

The availability rate sat at 3.1 per cent in the quarter, down from 3.3 per cent three months earlier, in an industrial real estate market that trails only Los Angeles and Chicago in North America.

The western GTA has been the most sought-after market due to its large labour pools and proximity to intermodal yards, airports and major highways. In all, 2.3 million square feet were leased in the third quarter, when the average asking net rent rose to $5.56 per square foot.

However, space in Mississauga and Brampton is drying up due to limited land available for new construction, so developers are looking further west to Milton where development charges are lower and land is cheaper and more plentiful.

Milton has 37 per cent of the upcoming industrial supply in the western GTA, with up to 2.6 million square feet of space to be completed by the end of 2016.

Caledon is also drawing developer-occupiers north of Toronto due to its land availability, according to Garrigan.

The northern GTA experienced increasing absorption and its availability rate declined from 2.8 to 2.5 per cent in the third quarter. More users in this area prefer purchasing rather than leasing properties, leading to a drop in the availability of product for lease.

The central GTA offers the lowest asking net rent at $4.55 per square foot due to its older space, lower ceiling heights and smaller shipping aprons. Its availability rate was 1.6 per cent, down from 1.9 per cent in the previous quarter.

Availability remained at 3.1 per cent in the eastern GTA, which experienced negative absorption in the second and third quarters.

“The desire for tenants to have access to the 400 series highway network pulls them to the western GTA,” said Garrigan. “The east market doesn’t have the roads and transportation infrastructure comparable to the west.”

Still, with development projects and infrastructure improvements including the extension of Highway 407 and the expansion of Highway 401 on the horizon, the eastern GTA is anticipating growth in commercial and residential activities.

The southwestern GTA, which extends into Hamilton in the Colliers report, recorded an all-time low availability rate of one per cent in the third quarter while the absorption value increased by 233,360 square feet during the same three-month period.

There are also strong indicators of upward momentum in land acquisitions and speculative construction.