The market for industrial space in the Greater Toronto Area is tight, good news for landlords and not so cheery for tenants, which has resulted in an increase in both rents and speculative development. 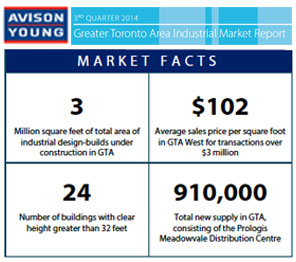 According to Avison Young’s third-quarter GTA industrial market report, demand for space is stronger than it was a year ago which is evidenced by both tenant activity and speculative development. Spec development, in the form of 4.5 million square feet currently under construction in 13 projects, is something of a wild card for next year and beyond.

The report finds that industrial has been getting tighter and tighter:  the overall availability rate dropped below five per cent in the first quarter of 2013 for the first time since the recent recession, and is now about 4.3%. That has pushed average asking rental rates to $5.84 per square foot (psf) net and developers are aiming for higher rental rates in the $6.50 per square foot range.

“The big picture is we are in probably the lowest vacancy environment that we have had for a long time, even going into 2008 I don’t think our vacancy was this low,” said Mark Sevenpifer, a principal in Avison Young’s Mississauga office.

Sevenpifer figures vacancy rates around Toronto are “about as low as we are going to go” and, conceivably, those rates could inch back up as new supply comes onstream. Currently, however, it is a seller’s market for industrial space and tenants are struggling, the AY executive noted.

“We are starting to see some shortages. If you have specific requirements, whether it is clear height or shipping or functional shipping/marshalling areas to move your trucks around, you just can’t necessarily fulfill that let alone be in the exact geography you want.”

He observed that developers are opting for larger developments to cater to users looking for space above 250,000 sf. Examples include Triovest in Milton, Ironside in Brampton, Hopewell (Mayport Distribution) Facility in Caledon and Carttera in Brampton.

“All those guys need big tenants.”

Part of that push was “economies of scale,” bigger is cheaper, but also to get ahead of higher development charges coming up in the near future, he said. The rush to develop means that there is a good stream of industrial coming for the GTA, which leads to the inevitable question of oversupply.

“I think you are going to see a lot of people rush to the table that otherwise might have been a little more cautious,” he said. “What that has done now is we have got a number of projects going on in the city. Are we overbuilding the market?

“So for the short term, the larger stuff, you are going to see developers achieve their rents but just achieve them. And there is already proof of that in the marketplace.”

Most developers have their new industrial space with an asking price of $6.25 per square foot “and they are just getting those numbers.”

Avison noted that out of the 13 speculative developments coming on to the market, seven will have a gross leasable area greater than 300,000 sf.

Among the trends Avison has found in the GTA, the tightest market for industrial space is in the under-120,000-square-foot sector “where tenants have seen a continued growth in rental rates.”

It is described as a “flight to quality” with more tenants looking for clear heights of at least 28 feet and a reasonable amount of office space characterized as five per cent of the gross leasable area.
That shortage of smaller space may cause some developers to target that market given that plenty of plus-200,000-square-foot product coming to market soon, the firm concluded.

It probably comes as no surprise GTA West is the preferred market for developers, investors, and tenants, but its dominance is stunning: it accounts for 93% of all speculative development and design-build activity across the GTA.

Avison noted that GTA West accounts for 2.8 million sf and notable design-builds include Unilever, Canadian Tire, and Acklands-Grainger. The market is also home to 10 speculative developments of 4.1 million sf among five developers.