The western Greater Toronto Area (GTA West) remains a focus of considerable office development activity, with more than a million square feet of space being built. 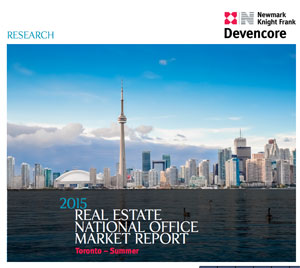 “I think it will continue to be a healthy, pro-development market, but I think the next six to 12 months will come with challenges in terms of leasing space,” said Rob Renaud, senior vice-president, managing principal and broker of record for Devencore Realties Corporation (Toronto West) Ltd., Brokerage, who contributed to a new Newmark Knight Frank Devencore office market report.

The combined class-A and -B vacancy rate in GTA West continues to track above 12 per cent and hundreds of thousands of square feet of existing and new space will soon be available in Meadowvale and the Airport Corporate Centre areas. Renaud anticipates there will be a bit of a slowdown until some of that space is absorbed.

New buildings that conform to LEED standards and have large floor plates and lots of amenities are being built in Oakville, along Eglinton Avenue in Mississauga and in other suburban corridors north of Toronto like Vaughan, Markham and Richmond Hill. They’re attracting professional services, technology companies, back office call centres and data centres, as well as other users that value transit-connected locations and lower rents than can be found in downtown Toronto.

Renaud calls such areas “huburbs,” as they’re becoming transit hubs that are driving office development in clusters that also include retail elements and food outlets.

According to the report, some of the major projects underway in GTA West include:

In need of a master plan

Compare those areas to what Renaud describes as the “relatively soulless” environment along Airport Road near Pearson, where much of the office inventory is three or four decades old and there’s little walkability, leading to plenty of vacant space.

“People want to walk to work or take the train and be right across the street from work,” said Renaud, who added some area landlords have made small-scale, piecemeal improvements to properties and are offering lower rents to attract tenants, but aren’t taking longer-term approaches that could have a bigger impact.

“Until they figure out a master plan for areas like that, I think they’re going to be suffering for a while.”