Ask Paul Finkbeiner about his current challenges, and the president of  Toronto-based GWL Realty Advisors, replies: “We don’t have challenges. Every year, we try to buy $600 million worth of real estate across Canada and we’ve got a lot of people who do that. 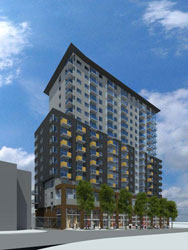 “I don’t think I have a challenge per se; I have a job to buy real estate. We’ve been able to find it. That’s what we do.”

It’s a matter-of-fact, low-key statement from a busy guy who runs one of the country’s largest real estate advisory groups. Finkbeiner and GWL do indeed buy real estate and they’re very good at it.

In late March, the firm bought a $15-million apartment building in Dartmouth, N.S., for a pension fund. Built in 2012, The Woodside has 96 units and is described as condo-quality rental living.

It’s typical of the work GWL carries out for their pension fund clients. The company looks for properties in different asset classes to diversify the fund’s portfolios and, ideally, to find good investments that will end up paying peoples’ pensions.

GWL itself is 100 per cent owned by the Great West Life Assurance Company, which created the subsidiary in 1993.

GWL has roughly $300 million of its overall $16 billion invested in assets in Atlantic Canada. Almost all the Atlantic Canada property is in Halifax and includes Purdy’s Wharf, an iconic two-tower property on the city’s waterfront that figures largely in any photo of the Halifax harbour and is the city’s only Triple A-class office building.

“We like Halifax because it’s the diversification play,” Finkbeiner says. “There’s good employment, mainly the provincial government and the number of hospitals and institutions in that market. It’s a very stable market.”

GWL is not just a purchaser and owner of real estate, but also an active developer. The company currently has about a dozen projects on the go, including the Halifax Citadel Redevelopment, a 17-storey apartment tower downtown that will contain 140 suites as well as a restaurant and retail at the base.

The apartment building is part of a larger redevelopment of SilverBirch Hotel & Resorts’ former Citadel Halifax Hotel, which is being turned into two hotel towers on the same site.

Approximately 50 per cent in Ontario

The majority of GWL’s portfolio is in Ontario, where the company owns roughly 50 per cent of its overall portfolio, followed by 22 per cent in Alberta, 15 per cent in British Columbia and “a smattering” across the rest of the country. “Ontario just has a lot of real estate and that’s kind of why you get in there,” Finkbeiner points out.

Finkbeiner says the company doesn’t favour any one space over another. Right now about 50 per cent of the firm’s assets are weighted in office, but that’s because many office buildings have a high value versus apartment buildings, Finkbeiner says.

Despite a number of recent market reports suggesting the office sector may be in trouble – Cushman & Wakefield in late 2013 warned the large amounts of office space currently being built would soften demand – Finkbeiner isn’t concerned.

“We’re in every market and every market is relatively in balance,” he says.  “I was in the industry in 1989. Then you had problems.”

In fact, when it comes to property prospects, Finkbeiner is sanguine. A year ago with low interest rates, he had to contend with the REITs for property, but for the time being they’ve slowed down as share prices have declined.

“Real estate is popular, has been popular, with the Canadian pension funds. The only thing that’s happened in the last year or so is the REITs were suddenly competing. Now they’re not there as much anymore,” Finkbeiner says.

Beyond that, he sees clear sailing. “I see steady, stable returns for real estate for the next year. We’re still leasing space. The economy is doing reasonably well, so it’s a nice steady-as-she-goes environment as far as I’m concerned.”