This month and next Habitat for Humanity is celebrating the opening of two newly built Toronto-area homes for low income families while also honouring two real estate heavyweights. 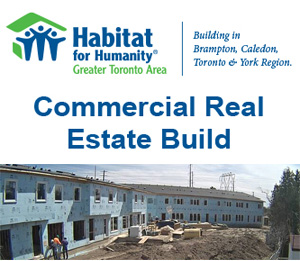 The effort’s organizer, David Ogden, who is also the founder and president of Secure Capital Advisors, has assembled support from a number of real estate companies to secure land and build homes in the city since 2009.

This year is the group’s most successful effort, doubling its traditional one-per-year build rate.

“We have two homes that we are dedicating this year, but we really started this about six years ago, raising money and building homes for families in need in Toronto,” said Ogden, who previously sat on the board and continues to be a member of the organization’s real estate committee.

The new Habitat homes on Brimley Road in Toronto’s east end are dedicated to the late Tony Arnoldi and “friend and mentor” Gerald Knowlton.

Ogden expects the group will be able to build more homes in the GTA going forward after last year’s merger of Habitat in Toronto with the group serving Peel and York regions to form Habitat GTA.

That should make it easier to find the most hard to secure resource, namely suitable land for home building.

“We had a real problem trying to find lands that were affordable in the 416 area code as you can imagine,” explained Ogden.

“Now because we are such a large geographic area and it is outside of 416 having Peel and York region, we are now approaching industry leaders (there) and getting them to donate land for us to build on.”

Habitat is currently building 34 homes in the GTA and Ogden expects that number to rise dramatically with the addition of the nearby Peel and York regions.

“I am just getting the word out to all the developers and owners and convincing them of the benefits,” of supporting Habitat through donations of land or money, he said. “It seems to be working, we are going to be able to announce a very large developer shortly.”

Key support for Ogden’s Habitat drive has been the Sorbara family headed by Joseph Sorbara and the Bratty family’s Remington Homes group.

Ogden said he was initially excited to be part of the Habitat effort because its lean operational model ensures “every penny” raised goes towards building homes. (The organization’s ReStore retail outlets support the cost of overhead).

Habitat for Humanity utilizes a six-step process to build homes:
1. It identifies eligible homeowners and prepares them for home ownership;
2. It helps owners build their homes with dedicated funds, materials and volunteer labour;
3. All donations go to homes as ReStore profits pay for all admin and fundraising costs;
4. The home is purchased with a “down payment” of 500 hours of sweat equity;
5. The homeowners’ interest-free mortgage is amortized to ensure payments are always less than 30 per cent of their income;
6.  All donations and mortgage payments are reinvested back into the home ownership program.

“The perception is people might think ‘Habitat is poor families, I don’t know if I want them around us.’ But the reality is that every one of these families has to qualify in terms of their income and go through a pretty rigorous process in order to qualify for a home.

“As a result these families, although we do subsidize them in many ways, they are actually paying for their homes,” Ogden said.