Halsall’s Ottawa office dovetailed its 50th-birthday celebration with an announcement its parent company has been acquired by a Montreal-based engineering firm.

Halsall is a consulting engineering company that was founded in Toronto in 1956 by Robert Halsall. Under the direction of past president Peter Halsall, Robert’s son, the firm added offices in Vancouver, Calgary, Burlington, Toronto, Richmond Hill, Sudbury, Ottawa and Washington, D.C. 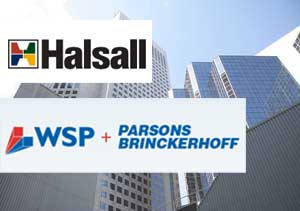 Company president Michael Van Dusen, who succeeded Peter Halsall in 2011 as its CEO, was on hand at Thursday’s birthday celebration in Ottawa. At the party, he announced Halsall’s parent company Parsons Brinkhoff had been acquired by Montreal-based WSP Group, formerly known as Genivar.

The acquisition greatly expands WSP’s reach by adding Parsons Brinkhoff’s 170 offices and 13,500 employees on five continents, increasing its  total employee count to 31,000.  The combined net revenue of the merged company is $3.8 billion for the past 12 months, according to the Financial Post.

Parsons Brinkhoff expanded its Canadian operating company with its acquisition of Halsall in 2010.  By then, Halsall had included Pivotal Project Management and Loop Initiatives, providing management sustainability consulting services. Both are part of the sale to WSP.,

The Caisse de dépôt et placement du Québec, already a major WSP shareholder, helped finance WSP’s acquisition of Parsons Brinkhoff through a $200-million private placement in the company. That brings total investments by the pension fund manager in WSP to about $420 million during the past three years. according to the Financial Post.

The Financial Post also reported that a $200-million equity stake in WSP by Canada Pension Plan Investment Board, a $502-million bought deal public offering led by underwriters CIBC and Raymond James, and about US$1.6 billion in new credit facilities accounted for the balance of the financing package.

The Ottawa office opened in 1964 where it has continuously evolved its mandate to accommodate the city’s engineering requirements of the day.  It started as a structural engineering firm and has provided services to the Ottawa school board for the construction of numerous new schools and other city buildings, including recent work on TD Place at Lansdowne Park.

The company added restoration and audit services in the 1980s and has a growing list of clients in Ottawa and Quebec. Recently, it became a National leader in building sustainability.

In his Ottawa presentation, Van Dusen emphasized Halsall’s commitment to sustainability and nature. In 2008, Halsall introduced a Corporate Responsibility Program, “one of the first of its kind in the engineering community.” Van Dusen’s comments were underscored by the event venue, the Canadian Museum of Nature, where the firm has also provided restoration services.

Van Dusen’s presentation honoured the track record of service provided by the Ottawa office and its first local employees who attended the event.  He called Halsall a “career factory” for young professionals in the engineering sector who have a particular interest in sustainability.

The diversity of the company’s project portfolio was on display in a slide show that ran at the birthday celebration.

Halsall has been a sponsor of the RENX Better Buildings Breakfast since its inception in 2009.