Blackberry owns the vast majority of the space it occupies, about 1.2 million square feet in all. The fact that the communications company owned most of its real estate,  rather than leasing it, used to give the industry some comfort. Not anymore.

With Blackberry shedding thousands of jobs and poised to go private through a deal led by Fairfax Financial Holdings Ltd., the company is exploring the sale of some of its real estate holdings. The move should not surprise anyone; the company is shrinking in shocking fashion and fighting for its existence.

Sounds like a recipe for disaster, right? Not really, observed one veteran of the southwestern market dubbed the “technology triangle” due to its status as a hotspot for innovative tech companies.

“For the last two years, we have been fielding  this question, everyone has been asking, ‘Hey, what happens if RIM or now Blackberry has some troubles or we get a doomsday scenario where they are sold and everybody moves out of town,’ ” said Karl Innanen, managing director for the Waterloo Region of Colliers International. 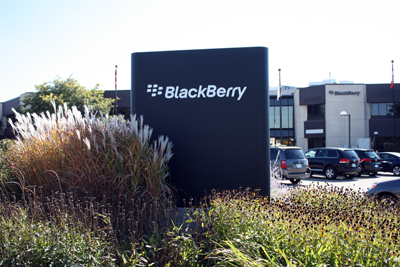 Innanen does not foresee doom for the office market because there is a larger, more influential force on the region.

“The goose that has been laying the golden eggs is really the University of Waterloo and the talent that is coming out of there. The computer science and engineering students that are coming out of the university are the ones that are creating all the great intellectual property that has made Blackberry what it was.”

About one half of Blackberry’s square footage is clustered around the university, making it prime property for any other technology company looking to expand or gain a foothold in the technology triangle.

Most of that real estate is industrial properties converted to office around the university “that is very well-located but probably not A Class as far as functional buildings,” Innanen said. As well, a few years ago the company built nearly 500,000 square feet of office space on the fringe of the campus area in a development known as RIM Park.

Finding buyers for Blackberry’s space will not be the monumental task that it might first appear. The Colliers executive noted last week that one well-known foreign name has already made serious inquiries about a large chunk of Blackberry campus space, and the real estate firm has since received another expression of interest from “another international technology company.”

On Blackberry’s recent decision to shed 4,500 employees, more than one-third of its workforce:  “40 per cent  job loss, there is no way to gloss that over. That will be big, there will be an impact on the community, that is something that will certainly cause some drag both on the real estate market and on the economy,” Innanen said.

There’s a big “but” coming.

“The challenge we have always had in this market – because Blackberry was growing so quickly from a real-estate perspective and a human-resources perspective –  there was all kinds of technologies and most of the large insurance companies in Kitchener-Waterloo (such as) Sun Life and Manulife, they have been complaining for years that they can’t hire anybody in Waterloo” because Blackberry and other tech companies have sucked the talent pool dry.

“Other people have called, other technology companies that have been shut out of the market because Blackberry overshadowed everyone else and were too attractive. People wanted to go work for them, people wanted to sell and lease space to them. Now it is opening up that market to them.”

The market got a bit of a test early in 2012 when Blackberry put up 200,000 square feet of office space for lease.

“It absorbed almost immediately. Manulife leased almost 150,000 square feet of that,” said the Colliers executive, who does not expect such fast absorption should the majority of the Blackberry portfolio go up for sale and lease, but “certainly we saw that the market had some pent-up demand.”