Toronto’s Loblaw Groceterias building — described as “the most modern warehouse building of its type in the dominion” when it opened in 1928, but which has been sitting derelict since the Daily Bread Food Bank left 15 years ago — is being renewed as West Block. 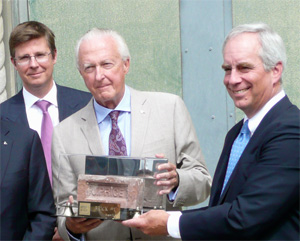 “This is the first truly urban redevelopment project for Choice Properties REIT and we’re pleased to be working in a joint venture with Wittington Properties Limited to integrate this important heritage building into a modern vision for the future that focuses on community and city-building,” said Choice president and chief executive officer John Morrison at a ceremony held at the site on Wednesday.

“It’s a partnership that will bring greater value to this iconic site by combining retail, office and residential with a shared vision for building a community in an urban setting. We believe that the revitalization of this iconic property will insure that the history of the site will be preserved and enjoyed not only by the local residents but the City of Toronto for generations to come.”

The 3.5-acre property at the northeast corner of Lake Shore Boulevard West and Bathurst Street will be redeveloped as an urban community comprised of a commercial  building and two residential towers.   A 50,000-square-foot Loblaws grocery store with 195,000 square feet of additional retail and office space will be located in the redeveloped seven-storey building. 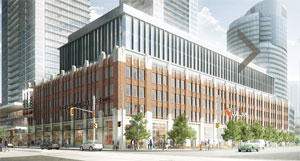 The existing 300,000-square-foot historic building served as the Loblaw head office and warehouse until the company relocated in the 1970s. The site received heritage designation from the City of Toronto in 2001.

Some contemporary modifications will be made to the sides of the building, such as enlarging window openings for retail use, while still retaining the original 1920s character and appearance.

The bronze doorframe belonging to the office entrance of the original building will be salvaged and restored. The exterior façade’s stone masonry and approximately 100,000 bricks will be dismantled one by one, cleaned and preserved, then put back together again to restore the building to its original glory.

Toronto mayor John Tory attended and praised the project, saying that the city hasn’t done a very good job of preserving its heritage and that too many buildings with a sense of history have been torn down in the name of progress. He looks forward to the development’s spring 2019 completion so one of the first things visitors to the city arriving at Billy Bishop Toronto City Airport see is a vibrant new complex instead of a rundown and vacant structure.

Developer Concord Adex has entered into an agreement to acquire the air rights for the site and will construct the residential component of the project. There will be condominium towers of 37 and 41 storeys that will contain 876 units with a residential gross floor area of approximately 575,000 square feet. Family-sized units will be included in West Block, which is the third development that Concord Adex has been involved with on Wittington-owned lands.

West Block will incorporate common space on unused land under the Gardiner Expressway that will include a public art installation and a café. Three levels of underground parking are proposed with approximately 600 spaces.

West Block is in Ward 20, overseen by councillor Joe Cressy, who said investments as part of the development are being made in affordable housing and a local park.

“As we grow this downtown, we need people who can live here, work here and play here, and this site allows them to do all three of those. This is the type of development we should be proud of.”