Holloway Lodging on the lookout for acquisitions

Holloway Lodging Corp., which doubled in size by acquisition in 2014, remains on the lookout for more buys even as the oil price plunge has dragged down the results of its hotels in Western Canada. 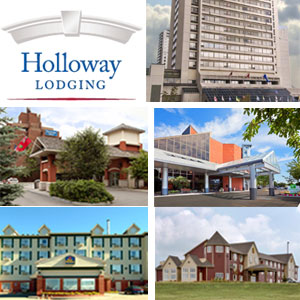 The oil-dependent West is the most logical place for the Halifax-based hotel operator (HLC-T) to be shopping but prices remain high, its top executive noted.

“We are certainly looking, but we haven’t been able to close anything since the beginning part of 2015, so we will see how that changes as we go through the winter season out there,” said Michael Rapps, Holloway’s chairman.

Would-be sellers are keeping firm on prices for now, he said. “The bid ask spread is still fairly wide and I think sellers’ expectations will need to come down before you get a lot of trades happening.”

(In the Property Biz Canada archives from May 28, 2012 Sleepy Holloway No Longer)

Holloway’s biggest deal occurred a year ago when it acquired 17 hotels, two freestanding single tenant properties and five parcels of development land from Royal Host Inc. for $16.4 million in cash and 1,637,967 shares.

The deal gave it Canadian master franchise rights to the Travelodge and Thriftlodge hotel brands in Canada but perhaps more importantly provided it with the geographic diversity it had been lacking.

The new Royal Host properties gave it some scale in Yellowknife and doubled its holdings in Atlantic Canada.

Holloway noted that for the first time the majority of its net operating income no longer comes from the Alberta and B.C. markets, making it far less susceptible to the gyrations of world energy prices.

That is not as bad as it initially seems, however, as two or its largest hotels (14% of its 4,132 rooms) were fully or partially closed for renovations during the quarter.

Those hotel renovations are close to completion with full operations set to resume by the second week of January, which will result in a drop of capital spending in 2016 and a boost to cash flow.

As well, Holloway said advance bookings at both hotels (DoubleTree by Hilton in London, Ont., and the Holiday Inn in Ottawa) “are being completed at substantially higher rates than the rates we obtained prior to the renovations, in some cases 50% higher.”

There was a Western Canada effect, however, as reduced oil and gas industry activity has resulted in falling occupancy rates, while room rates have remained more or less firm.

“It has been lower occupancy as opposed to lower rates,” said Rapp. “If people are going somewhere that is remote, they are going there for a reason, in which case you might as well try to maintain your rate.”

On the bright side, the company noted the performance of its hotels in Atlantic Canada “exceeded internal expectations.”

While Holloway waits for acquisition opportunities to appear, it is focused on wringing better performance from its current portfolio, stating it “will continue to take all actions in our control to maximize revenues, including diversifying our sources of occupancy and actively managing our rates, and reducing our costs.”

Holloway said it expects “considerable uncertainty regarding oil and gas activity in Western Canada as a result of lower energy prices and changes in the Alberta and Canadian governments” to negatively affect its Western Canada hotels but expects its Ontario and Atlantic Canada hotels “to continue to perform well.”

(Images of hotels from the Holloway Lodging Corp. website)