Hollyburn Properties Ltd. is celebrating 40 years of operations, and its anniversary was made a little  happier last week with the $42.5-million acquisition of the 10-storey, 125-unit Avenue Park Apartments at 103 Avenue Rd. in Toronto. 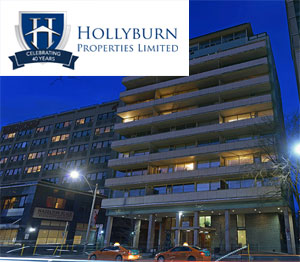 “It was a mismanaged, unstable asset in a dynamite AAA location within the heart of Yorkville beside Hazelton Lanes and anchored by Whole Foods,” said Hollyburn director Dan Sander. “With our improvement plans in place, we feel 103 Ave. has the potential to be transformed into one of the most desirable rental addresses in Toronto, not unlike one of our flagship assets at 20 Prince Arthur we acquired 15 years ago.”

Privately held and Canadian-owned Hollyburn was founded at the foot of Hollyburn Mountain in West Vancouver in 1975 and has grown steadily over the years while moving east into Calgary, Toronto and Ottawa. The property management and investment company has doubled in size to more than 5,000 units in 75 properties since 2008.

“Buying or building high-quality rental product in the most sought after and dynamic locations in Canada” is how Sander describes his company’s investment strategy, which places an emphasis on stable and steady returns.

“The low interest rate environment, combined with increasing customer demand for the product, in conjunction with more capital looking for safety in commercial real estate in Canada, have allowed for the beginnings of what could be a new wave of purpose-built rental product being brought to market,” said Sander.

This environment has prompted Hollyburn to launch its first new construction rental building that will stand on the corner of 13th Street and Chesterfield Avenue in North Vancouver’s Central Lonsdale precinct.

“There are several other sites in the planning and rezoning phases, including some interesting infill opportunities,” said Sander. “Hollyburn is committed to building long-term, sustainable rental buildings that enhance the rental stock of the neighbourhood and contribute quality-built and managed housing to the community.”

Hollyburn’s hometown of Vancouver remains its biggest market with 49 properties in the West End, West Side and North Shore districts. It owns 17 apartments in midtown and downtown Toronto along with one in the west end of the city. There are six downtown Calgary buildings and two complexes in downtown Ottawa. The plan is to remain focused on and grow in those four markets for the time being.

“The renovation of existing rental apartment buildings is the foundation of Hollyburn’s sustainability model,” according to Sander, who said such projects include replacing outdated and oversized boilers with high-efficiency modulating boilers and frequency drives for water pump circulation, as well as new elevator equipment, roof replacements and insulation.

Ten-kilowatt solar energy panels were installed on the roof of a Hollyburn-owned apartment at 1286 Islington Ave. in Toronto in 2012 under the Ontario Power Authority’s Feed-In-Tariff program.

Sander said the company also has a “Smart Suites” program that “replaces all existing machines and suite amenities on turnover with Energy Star appliances, LED or compact fluorescent light bulbs, and low-flow faucets and toilets. Improvements such as these reduce energy consumption by approximately 20 per cent and save thousands of gallons of water each year.”

Hollyburn became the first company in Canada to successfully obtain the Canadian Mortgage and Housing Corporation’s energy efficiency rebate in August 2013 and the company has been reimbursed more than $37,000 for its actions in reducing energy consumption.

Hollyburn has value-added corporate partnerships with companies including Aspen Clean, CostCo, FrogBox and Maple Leaf Self Storage, which provide discounts to tenants.

Sander said it also promotes special events, seasonal decorations, food and clothing drives to provide opportunities for apartment occupants and employees to get to know each other better and create a sense of “neighbourliness.” The company has live-in managers at all of its buildings to provide service and support.

Hollyburn also commits to actively participating in the communities it operates in. It donated land and money for the North Vancouver Public Library and has partnerships in Vancouver with King George Secondary School, Gordon Neighbourhood House, RainCity Housing, The Next Big Thing and Boy Scouts of Canada involving a variety of programs to help youth and the disadvantaged.

“Hollyburn has also established a unique initiative with Covenant House in Vancouver and Toronto,” added Sander. “Hollyburn currently provides five fully furnished and subsidized apartments to Covenant House to house youth in their transition to independence. Fifteen youth have successfully graduated from the one-year program to date.”