Canada’s hotel industry is one of the hottest sectors in real estate today, accounting for $1.46 billion worth of transactions last year as institutional players and other non-traditional buyers have poured into the space. 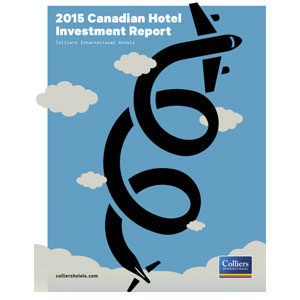 A string of eight $1-billion-plus years over the past decade (broken only by the post-crisis years of 2009 and 2010) is expected to continue as fundamentals for the lodging industry improve, according to analysis from Colliers Canada’s 2015 Canadian Hotels Investment Report.

“We’re definitely now a market that is a $1-billion plus in hotel investment activity in what historically used to be $500 million on average and we see that continuing,” said Alam Pirani, Colliers Canada‘s executive managing director and head of the Canadian hotel group.

“It really is a function of larger product coming to market. Operating fundamentals are strong, the cost of debt is at an all-time low and there are more debt players that are participating in our sector than ever before.”

The times they are a-changin’

What’s changed for the hotel sector in the past few years has been the entry of institutional heavyweights Morguard and Kingsett Capital.

In 2012, Morguard Corporation purchased the Toronto Airport Marriott for $30.6 million, marking their entrance into the lodging sector, and a year later Morguard bought the five-property Toronto Marriott Select-Service Portfolio for $70.6 million from Lubert-Adler Real Estate Funds and Concord Hospitality Enterprise.

“Each one took a bit of a different approach,” said Pirani. “Morguard has purchased six hotels and taken a significant position in the market. Kingsett took its position with InnVest, the largest publicly traded hotel REIT and also purchased part of the (Fairmont) Royal York.”

Kingsett kicked off 2015, along with InnVest REIT, with the $186.5-million acquisition of the Fairmont Royal York in Toronto, with the seller, Ivanhoe Cambridge staying in as a 20 per cent partner.

Morguard and Kingsett’s interest “has legitimized the industry and I think it is a combination of factors,” said Pirani. “These groups are very savvy and see an opportunity in the market but also the yields tend to be a bit better than traditional real estate with multi-res and industrial being so competitive.”

Colliers expects 2015 to stay “robust” for real estate values despite a modest slowdown anticipated for Calgary (+3.4%) and Edmonton (+2.0%).

“No one anticipated what would happen to the price of oil but notwithstanding that, it is a very healthy environment, operating fundamentals are very strong, supply is in check – that has always been a big challenge for our industry,” said Pirani. “The conservative lending environment certainly helps.

“We are seeing a lot more liquidity on the debt side which is another factor which has brought a lot of investment activity to our sector but it is very conservative which I think is good.”

Colliers’ official hotel forecast for deal volume in 2015 is between $1.25 billion and $1.5 billion “supported by the strong pipeline and deal momentum entering the year given the mix of both single asset and portfolio transactions.”

Given the slide in the Canadian dollar – from parity between 2010 and 2013 to approximately $0.80 by the end of the first quarter of 2015 – making Canadian hotel properties increasingly attractive to foreign buyers. Conversely, the loonie’s dive should keep more Canadian investors close to home and interested in deploying capital in our markets.

Colliers is also counting on China.

“We believe Chinese capital will form an expanding component of the overall buyer mix,” the firm said in its report. “The Canadian economy is perceived as a safe and stable market and there is a growing propensity of Chinese capital seeking to invest in stable markets like Canada.”

“This is supported by the recent easing of Chinese restrictions on investing outside of the Mainland. An added incentive is the weaker Canadian dollar against the Chinese Yuan, which has appreciated strongly along with the U.S. dollar since late 2013.”

Colliers is also looking to a continuation in the recent trend of hotel properties converting to alternate use may in major markets.

“The Canadian residential housing market remains very robust and a variety of older hotel inventory is ripe to come out of inventory and converted/redeveloped to alternate uses, such as residential condominiums and student or rental housing, particularly in Toronto, Vancouver and Montreal.”

There were 127 trades reported for the year, roughly split equally between Western and Eastern Canada. This compares to a low of 74 trades at the bottom of the cycle in 2009.

Last year saw the greatest amount of large single asset transactions since the last peak in 2007, with 14 deals trading above the $25 million threshold.

Colliers found activity was supported by an elevated level of competition by a variety of buyer groups for high-quality and well-located assets across the country.

Private investors were the most active in 2014 accounting for 30 per cent of buy-side transaction activity ($434 million) compared with 25% of volume ($317 million) in 2013. Activity by private capital has been a consistent segment of deal volume, averaging $310 million per year since 2009.

The largest private-sector deal in 2014 was the Best Western Plus Sands in downtown Vancouver for $30.3 million (or $252,900 per room), followed by the Courtyard by Marriott Toronto Brampton for $25.1 million (or $157,900 per room). Private investors comprised the majority of transactions with 74 trades over the course of the year.

Real estate companies accounted for 21% of overall volume – driven primarily by land motivations for eventual redevelopment, conversion to alternate use or diversification of their real estate portfolio.

There were 14 acquisitions by this group, the largest being the Courtyard & Residence Inn by Marriott Calgary Airport for $66 million ($201,200 per room) and The Fairmont Empress Hotel in Victoria for $48 million (or $100,600 per room), both of which were acquired by diversified real estate companies.

Institutional groups were active in major urban centres such as Toronto, Calgary and Halifax acquiring five substantial assets which accounted for 14% of total volume for the year.

Hotel investment companies continue to be motivated by “opportunistic turn-around” deals. These companies have historically been strategic in hotel investments commonly timing the market and acquiring properties at a lower price per room and repositioning with capital and other value-add opportunities.

They were particularly active in Ontario, most notably acquiring assets from institutional sellers. There were 25 transactions to HICs, the largest being the Delta Toronto East for $32.75 million ($89,500 per room).