An index has finally been created to measure the broad range of forces and complex interactions that determine the affordability of housing in Ontario. 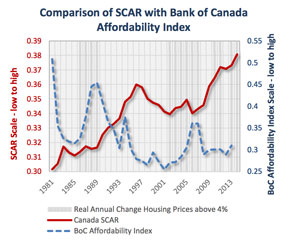 “The information picture was incomplete and the models were insufficient,” said Residential Construction Council of Ontario president Richard Lyall, whose organization represents builder interests and funded an independent study by the Canadian Centre for Economic Analysis (CANCEA).

“Unlike most affordability indices, SCAR measures the true cost of using shelter against the ability to pay for it, after covering other essential expenses,” said CANCEA president and chief executive officer Paul Smetanin.

Discretionary net income after other necessities is the money a household has available to pay for the consumption costs of shelter. It includes after‐tax disposable income minus financial obligations, food, clothing and private healthcare costs.

The SCAR index shows affordability pressures have grown by an average 13.5 per cent in Ontario since 2006. The results for the Greater Toronto and Hamilton Area (GTHA) are expected to be even more pressing once they’re analyzed in future research.

Why is the SCAR index so high?

The Canadian home ownership rate grew from 63.9 per cent in 1999 to 67.6 per cent in 2014. Despite current near-record low interest rates, Smetanin said mortgage debt levels have more than doubled since the early 1990s.

Income and wealth inequality have accelerated since the financial crisis at the end of the past decade. Wages paid to much of the population haven’t kept pace with costs, and workers under the age of 45 are heavily involved in precarious labour.

Competition for desirable housing, investor activity and access to cheap credit have fuelled a process by which the shelter needs of the middle- and low-income classes have become increasingly unattainable.

“Crowding out occurs when the consumption and/or investment behaviour by one group reduces the ability of others to access the market,” said Smetanin.

This has caused many younger, middle- and low-income households to take risks that exceed their ability to sustain small economic shocks that affect either their income or the cost of supporting their significant debt loads.

“People are taking on significant financial risks and amounts of debt to secure shelter,” said Smetanin. “For example, of people in their thirties and forties, 70 per cent of them have between 1.6 and 1.85 times more debt/income ratio than the national average.”

“If the GTHA aspires to be more than it is today, we have to figure this thing out and pull out the stops because the more time wasted, the more duplication of regulation and so on and so forth, we jack up the price of housing, reduce disposable incomes, hurt the economy and create problems where we’re not going to be able to fund the infrastructure,” said Lyall, who lays some of the blame on a lack of coordination among the myriad government agencies with a finger in the housing pie, causing delays and raising costs when it comes to building appropriate housing.

“Our high-rise condo market is fantastic and, for what it is, it’s doing a great job of serving the downtown core. Our low-rise market is a pretty specific market and is good for what it is, but we’ve got this big mid-rise gap in the middle.

“The challenge for mid-rise is that most of it is infill, brownfield and main street development, and that’s when you get into the difficulties related to NIMBYism and regulations and so many things that are prohibitive.

“We really need to look at all that stuff and increase the supply of housing, especially areas devoted to middle-income working families in reasonably close proximity to where they’re working.”

“If you build a line but can’t redevelop along that line, what’s the point?”

People forced to move to areas away from their jobs in order to find affordable housing often end up in locations with little or no convenient access to public transit, which forces them to drive to work and increase greenhouse gas emissions and traffic congestion — two areas in which governments are attempting to cut back.

Similarly, those forced to live in sub-standard, unsanitary or unsafe housing for economic reasons often have greater healthcare needs — placing a bigger financial burden on them, the government and taxpayers.

“We want to keep our industry vibrant and strong and to keep growing and building, and we see opportunities in that whole middle ground area, but with the regulatory environment we’re in I don’t know if we’re going to hit them,” said Lyall.

“It’s a complex and many-disciplined problem,” concluded Smetanin. “It will take several well-coordinated policies across different tiers of government and agencies to relieve the pressure.”

RESCON is a unique association catering solely to builder interests and issues. RESCON and its affiliated associations are the industry voice on all key construction-related builder issues and interests.