Toronto’s office market: The devil's in the details

It’s well-known that Toronto’s downtown is in the midst of something of a building boom. The burning question that a panel of office industry executives attempted to answer at last week’s RealLeasing conference in Toronto is whether it’s sustainable and what does it mean for existing buildings? 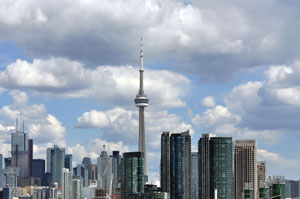 Session moderator/Altus InSite president Sandy McNair noted that it is “starting to feel a bit late in the cycle,” given all the activity since the last down cycle of 2008-09. However John Peets, vice-president of office leasing at Oxford Properties Group is an unabashed optimist, citing the expected population growth of three million people over the next 20 years.

“The train has a lot of momentum and if you look at the investments that have been made in the downtown infrastructure, you have got $1 billion at Union Station, you have new restaurants, you have 55,000 condo units that are being built downtown. It is an incredible story and it is going to ride through some dips and blips, but it is going to keep on going and get better and better and be similar to New York.”

Peets said that unlike the last cycle when new buildings seemed to suddenly appear all shiny and new in 2009-10 (coincidentally at exactly the worst time), the current building boom seems much more measured.

“It is very steady, it is very stable and it is not coming all at once like it did in the last year,” he said.

What’s under the shovel?

Peets added that Altus InSite’s big six, which feature a range of delivery dates, in fact boast better lease rates than what has been posted. “The success of these new buildings this time around has been extraordinary, much better than the last cycle.”

One of the most revealing charts Altus’ McNair threw up for the RealLease audience was just what is, and what isn’t being built in the Toronto market.

Altus divvied up Toronto’s downtown into six areas and found, perhaps not surprisingly, that most of the construction since 2000 has occurred in downtown south and the financial core.

Panellists did not disagree with the facts presented, though they did have a different take on what it means for the near future.

Tim Low, vice-president of leasing with Allied Properties REIT, said that he expects downtown west will see more building activity in the future, in part because the REIT has targeted that area for growth.

“We have a lot of land that is under-utilized and as we cluster and acquire a number of these buildings, we have the ability to increase the density of these sites. So you will see about three or four other potential developments that are not going to be talked about today in the downtown west that we will hopefully get a chance to build over the next five years or so.”

What big stuff’s next?

“These are big bets, these are arguably $400 million, $500 million, $600 million each, which are by anyone’s terms serious money,” said McNair, who asked the panel what kind of rents building owners would need to make the math work.

The answer is it depends.

“It all depends on your land costs, your development team and what you are building,” said Peets. “Most of these buildings, truth be told, are being built for $500 a square foot, they are not being built for what BCE Place (now known as Brookfield Place) was built at which was probably upwards of $750 a square foot. We will never see another building like BCE Place again, but you will see buildings in that $500-a-square-foot range with land and hard and soft costs all factored in.

“So to make the kind of returns that you are looking for as an owner, you do need at the low end for the first tenants coming in and starting off these buildings that $24 or $25 net effective range up to what we are seeing at Bremner in the south core in that $29, $30, $31, net effective range.”

Allied Properties, which has two of the big six proposed downtown core buildings, “have enough demand, especially at The Well, to justify doing something there which we are going to start in the new year,” said Low. “We are going to try and pre-lease 30 to 40 per cent.

While the downtown new builds have attracted tenants throughout the city core, some buildings fared worse than others. Altus identified eight towers that entered 2013 with the biggest holes to fill (accounting for 1.75 million of the five million SF of class-A space available in the downtown). In all, the eight filled 200,000 SF but that success was not even, with four buildings filling, three suffering more vacancy and one staying the same.

Here’s how Altus’ empty eight fared over the last 12 months:

If anything, the “pockets of pain” have gotten worse this year, with eight buildings now containing 46% of the current class-A available space in the downtown. According to Altus, those are: