The growing popularity of owning vs leasing in Western markets

Low interest rates and strong growth is making owning versus leasing an increasingly attractive route for business owners, according to Michael Hungerford, a partner of Vancouver-based developer Hungerford Properties.

Saying that commercial tenants are increasingly moving to ownership of warehouse and office space is more than just a claim for Hungerford as the company has some pretty sizeable bets in play to capitalize on the trend.

“Business owners have the option to buy or lease and the benefits of buying are quite significant,” said Hungerford. “They are growing equity in their business, they are having greater control over their destiny, so to speak, and over their costs and it gives them more flexibility over the long run. And they can add value to their space, build it out and improve the space and unlike if you are leasing, any improvements to the space are owned by the landlord.” 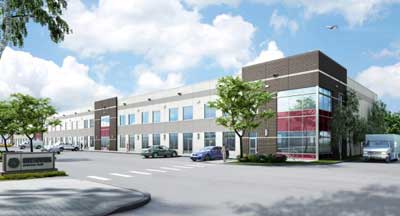 The developer has four industrial and office projects active in Calgary. Two are currently in the sales cycle: NorthWing Business Park, in Calgary’s northeast transportation hub with small bay and medium bay spaces – ranging from 2,200 to 50,000 square feet; and Nexus Business Centre, a “state-of-the-art” office/warehouse development in the Meridian/Franklin area which offers would-be owners showroom, warehouse and office space. Colliers rates NorthWing as the best-selling commercial condo project in Calgary for 2013. (Shown in image below)

Cheap financing thanks to historically low interest rates are driving the commercial ownership trend across Canada, said Hungerford. In Calgary specifically,  there is plenty of space available for units larger than 25,000 square feet while the market is “balanced” for small space.

Hungerford was part of a panel discussion the week at the Calgary Real Estate Forum discussing the hot industrial market and its impact on small businesses.

Alberta is leading the growing trend of small businesses owning versus leasing warehouse and office space and Calgary is a hotspot for this trend. “There are very few large industrial condos for sale in the city,” explained Michael Massing, senior associate of Industrial Sales and Leasing for Colliers International in Calgary. “It’s a hot, new concept in Calgary and it’s in high demand. Many entrepreneurs and business owners want to own their real estate and create equity at a comparable cost to leasing.”

Hungerford has found that buyers for commercial space are both businesses that are currently leasing and those that own their current real estate but have outgrown it.

“It’s a mixture,” he said. “The opportunity that we see in the condo market is that a lot of the comparable product is quite dated and to some degree it is obsolete. It is not very functional, it has low ceiling heights or the buildings don’t have enough power or they don’t have very good marshalling areas for loading or the office has bad HVAC systems. Whether it is warehouse or office, there is a lot of old product.”

Hungerford’s development model is predicated on building modern commercial space in well-located areas of the cities it operates in: Vancouver, Calgary and Edmonton. “Our projects are quite close to the city. Competing product or options are quite dated, so we really can compete well. We are basically offering modern, class A space at a great location where with the alternatives, tenants have to compromise.”

“We are pricing it so that it makes sense for an investor and for a business owner, when you do the math and compare the leasing cost, it is also a very attractive price.”

A main selling point for the Vancouver company is a fast-development schedule, said Hungerford. “From start to completion, we are looking to complete in less than a year: from the first sale to the first occupancy of the building. Small business owners like that, as much as they would like to plan their business out longer-term, they often have to make longer-term decisions so within a year seems to work for the market.”

He breaks down the one-year development period to eight months of construction and four months of selling at the start of the project.

Hungerford’s selling strategy can be described as a “first-in, best-deal” model to create a sense of urgency.

“We have been raising prices and that is a strategy that we deliberately use. We really try to encourage people to make the commitment with us and as we get closer to completion, the pricing on the project increases.”