One of Manhattan’s most distinctive office properties has changed hands. 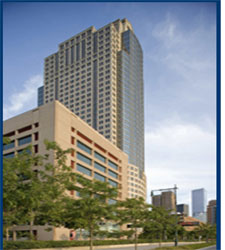 The 39-storey 388 Greenwich St. stands 495 ft. tall and has been a New York City landmark since the late 1980s. Set along N. Moore St. and West St., it remains a prominent structure in the TriBeCa neighbourhood.

Situated a mere 10 blocks from the World Trade Centre, its place in New York’s memory is both sombre and controversial. During the Sept. 11, 2001 terrorist attacks, the building’s courtyard became a localized triage centre.

Earlier in its history, a 50 ft. by 50 ft. four-storey red neon umbrella erected on the roof, accompanied by a steel 16-ft. red umbrella sculpture at street level, identified the location as the Travelers Building. The St. Paul’s Travelers Company’s distinctive logo drew the dual descriptors of “emblematic and distracting.”

388 Greenwich is still one of the few buildings in the city to use double-deck elevators, requiring fewer stops, allowing access from consecutive floors and providing a more efficient use of floor space.

The two-building campus, headquarters for Citigroup’s  Global Wealth Management and Global Trading divisions, has a stunning view of the Hudson River and also houses one of the most sophisticated and efficient trading centres ever built, according to SL Green’s website.

In December, Citigroup renewed its lease until 2020, at which point it has the right to either renew for another 15 years or buy the buildings outright for about $2 billion. More recently, Citigroup’s option to buy was extended to 2050, an agreement that also allows it to gut and renovate the properties, according to reports in the Commercial Observer.

SL Green financed the purchase of 388-390 Greenwich Street with a new seven-year, $1.45 billion mortgage provided by a lending group led by Citigroup that included Bank of China, Wells Fargo, and Barclays, the Wall Street Journal reported.

Ivanhoé Cambridge announced the sale of its partnership interest in the New York property on Friday and though terms of the sale weren’t disclosed, several media sources pegged the buyout at about $800 million.

“We have enjoyed a successful partnership with Ivanhoe Cambridge at 388-390 Greenwich, capped by Citi’s recent lease extension, which was one of the largest lease transactions ever executed in New York,” Andrew Mathias, president of SL Green, told The RealDeal. The lease both secures the company’s largest tenant and locks in the value of its biggest asset.

“This transaction is another step forward in implementing our strategic plan for the U.S. market,” said Adam Adamakakis, Ivanhoé Cambridge’s executive vice-president of investments in the U.S. “We look forward to reinvesting this capital into other high-quality properties in major markets as we continue building a national U.S. office platform alongside our strategic partner Callahan Capital Properties.“