At one point in its 99-year history, the 26-storey Sun Life Building in downtown Montreal contained a bowling alley on the 10th floor, a shooting range on floor 16A, pool rooms in the basement and seventh floor, and porters on the passenger elevators.

Owned by Sun Life Financial and Ivanhoe Cambridge and managed by Bentall Kennedy, the grand old building recently got its due with the presentation of the 2013 Commercial Heritage Award.

The building was one of 22 to receive awards at the 23rd edition of the Montreal architectural heritage campaign. The Ville de Montreal and Heritage Montreal jointly present the awards, which were created in 1991 and educates and emphasizes the importance of protecting Montreal’s built heritage and recognizes efforts to maintain properties. 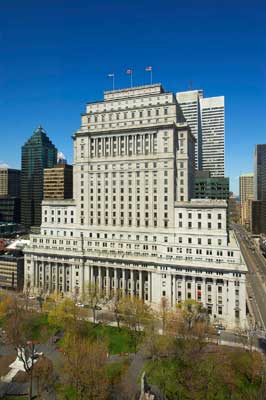 “An increasing number of Montrealers feel attached to the built heritage and to the city’s uniqueness and distinct character,” Montreal Mayor Laurent Blanchard said in a statement. “I would like to congratulate the owners who have helped to preserve and enhance their properties and buildings to reflect our city’s history.”

Isabelle Hudon, president of Sun Life Financial, Quebec, called the award a great honour. “We are proud to have our 1,800 employees thrive within a historical building of architectural prestige.”

Proud history of a magnificent building

The cornerstone for the Sun Life Building was laid in 1914 and the original structure  the Toronto architectural firm of Darling and Pearson designed went up in 1918.

The then-seven-storey building had a banking hall on the main floor lavishly constructed from exotic materials, including walls of Italian rose Tavernelle marble, counters of Levanto marble and floors of Tennessee marble.

The building underwent expansions in 1926 and 1933. The completed structure, a 26-storey, 450-foot high tower, featured 60-foot Corinthian columns with exterior walls of Stanstead granite. It was at that point the building contained the bowling alley and other notable features.

Between 1986 and 1999, Sun Life of Canada carried out a $150-million retrofit of the building in three phases. The retrofit included replacing the building’s 1,600 windows, modernizing the mechanical and electrical systems, fire-proofing structure and more.

“The unique and magnificent architectural signature of the Sun Life Building lends a great deal of prestige to our portfolio of real estate holdings in Quebec,” Claude Sirois co-COO and executive vice-president of Ivanhoe Cambridge, Quebec, said in a statement.

“This award not only attests to the past splendour of this majestic office complex, but also to the outstanding efforts carried out on a daily basis to ensure the enhancement and preservation of the building.”

Some other winners at the architectural heritage campaign included:

* The Commission scolaire de Montreal and the firms of Vincent Leclerc + Associes Architectes and Affleck de la Riva Architects for rehabilitating and recycling the buildings of the former Victoria School, one of the rare surviving 19th century school buildings;

* And to Cite Historia for promoting the history and heritage Sault-au-Recollet in the Ahuntsic-Cartierville borough.