In gridlocked GTA, tenants pay up for transit proximity

A new research study from Jones Lang LaSalle tells residents of the GTA something they already know – traffic sucks – as well as something that they might not: office tenants in the metro areas emerging business hubs are willing to pay a “substantial premium” to be close to rapid transit nodes.

JLL’s report, Expanded Transit and Emerging Business Hubs looked at the impact of transit access on commercial real estate market outside the downtown core (which is very well-served by the two main transit arteries of subways and Go Transit).

The study found that buildings within 500 metres of subway stations in the Greater Toronto Area’s midtown and selected suburban markets have vacancy rates less than half of those outside the radius and command average net rental rates 38 per cent higher.

While JLL expected some difference when it started its study, the magnitude was startling. “I was definitely surprised by how big of a discrepancy there is, the difference between on and off rapid transit especially in some markets,” said Thomas Forr, JLL’s national research co-ordinator and author of the Transit Report. “I expected it, but I didn’t expect it to be that high.” 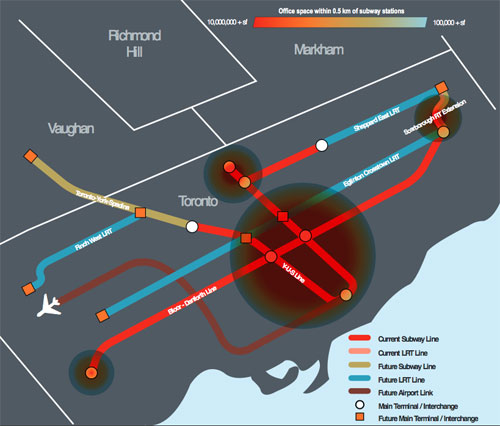 Why is soon apparent: people would take the subway or train to work if it was halfway convenient because driving is less and less of an option.

• The average GTA commuter spends 82 minutes trying to get to and from work every day. That number will grow to 109 minutes “if the status quo is maintained.”

• More than two million automobile trips are made during the peak hours each morning in the GTA. That number is expected to reach three million by 2031, with an average vehicle holding 1.2 people.

• The GTA is currently home to just over six million people and projected to be 8.7 million in less than two decades.

The GTA’s two main rapid transit systems; the GO Transit rail network and Toronto Subway System serving (Yonge-University-Spadina, Bloor-Danforth, Scarborough RT and most recently, the Sheppard line) were for the most part completed decades ago and serve the needs of downtown Toronto.

“Over the past three decades, however, office employment has shifted from Downtown Toronto to suburban markets which lie beyond current rapid transit systems, fueling the need for new infrastructure and/or expansion to existing systems,” the report said.

Given that GTA traffic is ranked worst in North America, planners had the choice of building new roads or transit. They have opted, belatedly, for transit. “I guess you could say better later than never but I think they should have built these out a few years ago,” said Forr.

• Toronto-York-Spadina Extension: 8.6 kilometres of track from Downsview Station to the Vaughan Metropolitan Centre. The subway will connect to other regional transit lines in the York Region such as Brampton’s Züm and York Region vivaNext BRT. Currently, the planning and design of the extension have been completed with a projected opening date of 2016.

• Scarborough Rapid Transit: Subway or surface, once the politicians agree, it could run from McCowan station and run North-Eastward along Progress Avenue to Centennial College. Will eventually connect the Bloor-Danforth subway line, EglintonScarborough Crosstown LRT and the new Sheppard East LRT line.

Winners from the transit expansion include the areas around York University and Vaughan with the Yonge-University-Spadina line extension. As a result of the extension, there has been an abundance of mixed-use development proposals, including a recent allocation of 140 acres by York University for mixed-use development. Among this are eight million square feet of new mixed used space that will be anchored by the new Steeles West Subway Station in the northwest corner of the York campus.

As well, the report finds that the City of Vaughan is poised for rapid growth and has recently dedicated 442 acres for the development of the Vaughan Metropolitan Centre (VMC), which is expected to include 25,000 residents and 11,000 jobs by 2031.