Poor indoor air quality, which has resulted in toxic mould lawsuits in the U.S., is a major “sleeper issue” for building owners in the United States and Canada, according to Erin Grossi, chief economist with safety science company UL. 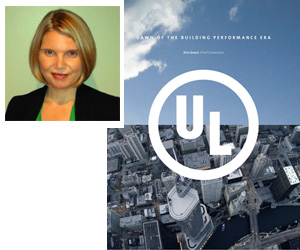 Grossi, who is presenting the findings of her white paper The Dawn of the Building Performance Era later this month at the Green Real Estate Conference in Toronto, said building owners have understandably spent the majority of their effort on energy, water and waste reduction but that air quality could take centre stage in the future.

“I know this is a huge concern of building owners,” said the Chicago-based economist. “Obviously they don’t want to talk about it too much.”

“Some of those that were winning; indeed it was workers who were in a building setting and developed some type of asthma-type symptoms and then brought cases against either the owners or operators of the buildings saying they were unduly harmed,” she explained.

“It is emerging as very similar to asbestos in that people are actively recruiting class-action suits and encouraging people to look at this. Now that they have won some cases, there is precedent.”

Grossi said climate plays a role for mould – drier is presumably better – but believes most North American commercial buildings have air quality issues to address. “I would expect that it is in the majority . . . are facing some type of issue.”

Given the focus on LEED and air quality in newer construction, Grossi said older buildings likely have the most potential for air quality problems. “I think the bigger concerns would be buildings (built) in the 1980s and before.”

In UL’s white paper, Grossi said the recognition mould is a cause of human health complications has catalyzed an “uptick” in related lawsuits in the U.S. There are now more than 14,000 pending building mould cases and with juries awarding multi-million dollar settlements, building owners and their attorneys are actively looking for ways to protect against related problems.

Also of concern for the real estate industry with regard to indoor air quality is “the growing amounts of chemicals in buildings, which can emanate from technology hardware, construction materials, furniture and furnishings, and cleaning products.”

It’s estimated there are 80,000 chemicals in international use today, with only three per cent having been fully evaluated for health impacts.

Technology has allowed the real estate industry to measure essentials such as energy, water and air quality like never before as “advancements in sensors, dashboards and integrated IP networks make the realization of energy and water savings and improved indoor air quality more financially viable and traceable.”

The paper identifies countries such as the United Arab Emirates (UAE) and Singapore as examples of jurisdictions in which there is much higher awareness of air quality issues “and thus a lot of public policy work is being done to improve it based on informed assumptions that air quality is negatively impacting people and causing upper respiratory infections and other complications.”

That is not currently the case in the States (or Canada for that matter). Grossi expects the issue of air quality will vault into public consciousness like bottled water did after people began talking about the downsides of putting water in cheap, clear plastic bottles.

“What might be the technological equivalent of bottled water for air quality that emerges in the world, causing people to pay attention to air issues and feel they have a viable choice that allows them to breathe purer air in their workspaces, hotels, homes and schools?”

UL is betting on the explosion of wearables devices to spark the air quality revolution. It sees hand-held air quality detectors, and Nest-like home devices (such as the Birdi). These devices “are beginning to market themselves as capable of detecting VOCs and allergens” and are “the most likely innovations to drive public consciousness of these issues over time.”

The devices could allow for the collection and display of live data on air quality in buildings and integrate that with dashboards that engage building occupants. It could be the topic of conversation, like outside temperature, pollution and pollen counts.

“The only difference is most people would actually feel they have a fair degree of control over the quality of the indoor air, whereas outdoor air is a bigger challenge for any individual to impact,” Grossi said.

UL estimates we are within five years of having robust and effective industrial and home detectors and monitors for air quality that can alert people when dangerous chemicals, allergens and particulate matter are present.

That’s a game-changer, the company insists.

“Once these products visibly hit the mainstream market, people will quickly forget how they lived in a world where they didn’t have access to information about the air they were breathing,” UL states in its white paper.

“Indoor air quality is clearly a ‘sleeper issue’ today, with a niche group of experts paying close attention to the sources, causes, impacts and solutions. Technology is poised to awaken our social consciousness on a grand scale, pushing forward the next generation of scientific work on air quality.”