The future of the St. Jude’s Cathedral in Iqaluit is in doubt due to the bankruptcy of a major northern construction company.

The Anglican Diocese of the Arctic issued a call for help after the receiver for the now insolvent company Dowland Contracting Inc. said it is seeking an immediate payment of $3-million as well as $30,000 a month in interest.

Arson destroyed the original cathedral in 2005 and the diocese has paid out more than $7.5-million for its rebuilding. The remaining funds were to be paid to the builder as funds were raised.

The diocese described this as an “informal arrangement” with Dowland Construction; however, the company went into receivership in May 2013.

The cathedral re-opened in June 2012, with the majority of the work completed.

“We have always remained committed to paying the balance owing on the construction costs to date,” David Parsons, bishop of the Diocese of the Arctic, said in a release.

“But these new demands now threaten our very existence.”

Parsons said the diocese did not create the situation. “We are an unfortunate third party caught in the middle of the building’s receivership proceedings. And it is the people of the Arctic who rely on our social ministry who will suffer.” 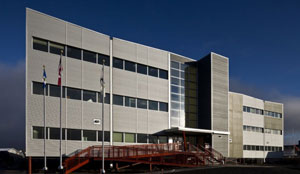 Bankruptcy impacts buildings across the region

The bankruptcy has impacted buildings all across the region. In the Yukon, Dowland was working on two hospitals with a combined value of $50 million as well as a fresh water pumping station worth approximately $5.5 million, according to the CBC.

The Yukon News alleged that work on the projects was over budget, behind schedule and facing a number of lawsuits from sub-contractors.

The RCMP building In Lloydminster, also a Dowland project, was reported to be behind schedule last spring as well. And the Terrance (B.C.) Standard said that 34 contractors are owed $700,000 from Dowland for work they did on a hydro-electric project in the area.

The company also defaulted on a $32.3-million renovation job on a hospital in Qikiqtani, Nunavut, the Nunatsiaq News reported.

Entrepreneur Guy Pemberton founded Dowland Contracting Ltd. in 1983. The company’s first project was a water treatment plant in Tuktoyaktuk. Since then, the company has gone on to build a massive portfolio of work across the Canadian North.

Its past projects include a coast guard building in Inuvik, hydro-electric projects in Northern British Columbia and Saskatchewan, schools and hospitals across the North, and infrastructure, such as the combined services building at the Yellowknife Airport.

The company opened offices not just across the North, but also in Kamloops, B.C., as far east as Thunder Bay and in Anchorage, Alaska.

The bankruptcy file says that Dowland owes more than $83 million with thousands of dollars of daily interest and legal fees, according to the Northern News Service.