The Canadian institutional commercial mortgage market is pegged at $144.9 billion as of May 2014, or four per cent higher than a year prior, according to a recently released report by the Real Property Association of Canada (REALpac). 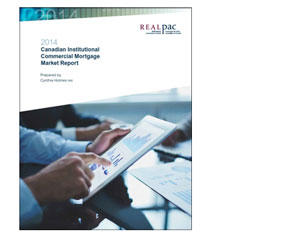 Over the past year, it is safe to declare the country’s chartered banks the leaders, accounting for 39.2% of commercial mortgages as of May 2014, up 10% from the 35.6% share they enjoyed the year before. Last year was also a good one for credit unions, which saw their share of commercial mortgages climb eight per cent (from 29.2% to 31.5%).

Some of that share for the banks and credit unions is coming from taking a bigger piece of a growing pie, but there have to be losers, too.

Insurance companies are taking it on the chin: their share has falled to 26.2%, down only one per cent from 26.5% the previous year but also continuing a five-year trend that has seen their mortgage holdings decline by five per cent as a whole. In fact, the decline marks a sea change for life insurers, who have been the “historical market leader” and as recently as 2011 still had the highest market share.

Not far behind is the “large and growing” category of National Housing Act Mortgage-Backed Securities in the multi-family category of commercial mortgage which reached $21.5 billion in 2014, up nine per cent from $19.7 billion the previous year.

Commercial mortgage-backed securities make up a smaller proportion of the market, just $8.9 billion in 2014, down 11% from the $10 billion realized the year before. The report notes CMBS issuances occurred in 2008, 2009 or 2010 “but there have been seven new issuances since then” although they have been “far below” the levels of 2004 to 2007.

The smallest category of holder in the commercial mortgage market is pension funds, with holdings reduced to $8.5 billion in 2014, down one per cent from $8.6 billion in 2013.

Looking back at the commercial mortgage market to 1985, the study finds life insurance company holdings actually peaked in 1992 and have been flat or declining since. In fact, insurers have seen a dramatic decline over the last decade: In May 2004, life insurers had a 45% share of the institutional market, but and that share in now down to just 25%.

Since the early-1990s peak for insurers, there has been a “long and sustained increase” in the volume of commercial mortgage holdings for chartered banks and credit unions. That growth has continued even in the face of new competition from the likes of CMBS and NHA mortgage-backed securities.

Based on CMHC data, the report finds the remaining principal balance of all NHA mortgage-backed securities is more than $410 billion. The majority of the total is classified as “homeowner,” which means the underlying security is a single home or a multi-family residential unit with two to four units.

Pool type 966 is specifically mortgages on multi-family structures with more than four units that are open to prepayment and pool type 965 mortgages that can include both single-family and multi-family structures and must be closed to prepayment have both experienced “dramatically high growth” with volume tripling in 2008 from the prior high point of 2007 and have remained high since then with record volume in 2014 at nearly $7 billion.

The biggest holders of multi-family mortgage-backed securities in pools 965 and 966 in terms of the largest outstanding balances are Equitable Bank, First National, Peoples Trust Company, and Home Trust Company, which combined represent 65% of the total remaining balance.

There were no CMBS issuances in Canada in 2008, 2009 and 2010 and there have been a total of seven transactions since. Only two firms, Institutional Mortgage Capital and CMLS Financial, have done all of the post-2011 CMBS issues.