As commercial real estate continues to grow in significance around the world, the imperative for international measurement standards has never been greater for investors, occupiers and service providers. 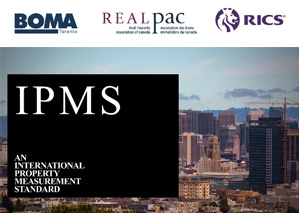 Property is measured in many different ways around the world and, depending on the standard, a floor area measurement can vary dramatically. This lack of consistency can make it difficult to compare like-with-like items and cross-border transactions and can have an impact on financial reporting.

The IPMS strives to introduce new standards to drive consistency and transparency, delivering clearer information to investors and occupiers.

“Measurement of space is a foundation to valuation, to value generally and to tenant and investor faith in landlords and market fairness,” said Brooks.

He added that North America is the only area in which the real estate industry uses the concept of “gross up” — which adds square footage for lobbies, elevator corridors and amenity areas — to get a rentable space number. That uniqueness could slow progress for the full adaptation of IPMS.

“I don’t see our industry moving off that in the near term, but at least we have IPMS moving forward. I think it will take 10 years-plus to take effect because current leases aren’t going to change and tenants aren’t likely to want to change terms during the lease renewal process.”

IPMS partners have announced their intention to use or request IPMS measurements and 150 have signed up on a voluntary basis to show their support for international standards.

The government of Dubai became the first to officially endorse IPMS and commit to its adoption last September, a core theme in its successful bid to host Expo 2020.

The next step is to implement the office standards, while consultation for residential standards is ongoing. Industrial and retail standards will follow.

In another effort to improve standardization, the Appraisal Institute of Canada (AIC) and RICS recently released a joint guidance note for Canadian valuation professionals whose work is required to comply with both the former’s Canadian Uniform Standards of Professional Appraisal Practice 2014 and the latter’s Red Book.

“There are some terminological differences and some slight methodological differences, but the reality is that they’re both very high-calibre standards in their own right and are both compliant with the International Valuations Standards Council’s standards that are applied in a large portion of the world.

“Whether you’re a purchaser, a vendor, an investor or a property manager, you can have a high level of assurance knowing that a valuation prepared in accordance with these standards has rigour and will stand the test of time.”

The intent is to guide the approximately 1,000 Canadian practitioners with dual memberships to ensure all appraisal assignments meet the highest possible standards. Lancastle said many AIC members were already meeting both requirements.