Can hosting an international sporting event boost a country’s foreign investment in real estate markets?  Has Brazil’s hosting of the FIFA World Cup contributed to what the commercial real estate markets refers to as “transparency,” the inter-related factors of market fundamentals, governance, regulation, legal issues and transaction flow that dictate how and where business is done? 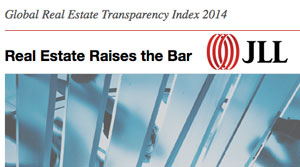 Lucy Fletcher, vice president in the Canadian capital markets and international capital group of JLL thinks it does. “Brazil’s tier one cities remain Latin America’s most transparent markets. I think a lot of that is a by-product of the investment that goes into infrastructure, some of the governance required around hosting international sporting events. Governments try to minimize corruption and those kinds of things.

“That inevitably creates a new real estate environment in which people can operate and invest – and ultimately a better product. That definitely is a factor: World Cup and Olympics do help,” said Fletcher referring to improved transparency in the effected Brazilian cities.

Qatar’s successful bid for the 2022 FIFA World Cup has also brought transparency issues into sharp focus, leading to more stringent building controls and higher levels of safety, according to the report. Nevertheless, overall Qatar scored well down the JLL transparency index at 58th while Brazil did better in 28th spot.

The sporting event finding dovetails with another result in JLL’s report that an expectation of transparency exists by global investors as they seek to introduce long-term portfolio strategies that include emerging markets.  There is also broader recognition by governments that transparent markets attract investments, which in turn offer significant benefits to societal as well as economic conditions.

The leaders from first to sixth in the top tier of “highly transparent” are United Kingdom, United States, Australia, New Zealand, France, and Canada. Helping drive Canada’s position into the top tier is the “quartet,” whose performance in areas such as business and investor friendliness highlights the different levels of success in the country. The quartet consists of Vancouver, Calgary, Toronto and Montreal.

Both Toronto and Montreal have previously achieved top five rankings in two major global assessments for openness of business transactions, Fletcher said. In the last 15 years, the four Canadian cities have also successfully created jobs and built new investment sectors, with Calgary leading by growing its employment base more than a third since 2000. “It’s easy to knock them on an annual basis, but if you look at them over a 10-year period, it’s above the North American average for a city,” Fletcher pointed out.

As for Vancouver, the West Coast city tends to be renowned globally for its livability, Fletcher said. The other three cities match Vancouver when it comes to health care and education, but Vancouver outperforms in the areas of urban environment and what Fletcher called the “green agenda.”

Need for improvement in Canada

Despite Toronto and Montreal’s ratings as investor-friendly cities, one of the areas in which Canada needs to improve is making it easier overall for foreign investors. Fletcher notes that in 2013, 32 per cent of investment from Australia was from off-shore, while Canada had only nine per cent.

“Because of the heavy weighting of domestic institutionally held real estate in this market, it makes it very difficult to penetrate for a foreign investor,” Fletcher said. “If you look at the downtown of the four major metros, the majority of that is owned by the Canadian pension funds.”

Another challenge Canada faces is improving its infrastructure. Collectively, Canadian cities have an infrastructure gap, which includes bridges, waste management and more, according to Fletcher. She argues that Toronto’s outdated power grid system has led to blackouts and notes Montreal has ranked in the top 20 as one of the most congested cities when it comes to traffic. “No city is perfect,” she notes, “and a lot of that is just a by-product of geographical constraints.”

Overall, Fletcher said looking at the top six countries, all of them face challenges, but generally Anglophone countries have tended to dominate the top transparency tier and it will be a long way before the more “opaque” countries move into the top category.

“That’s going to require a fair amount of change in legal systems and the way you’re accounting for government and city planning policy. Whereas I would argue the Canadians do a very good job of covering that off.”

In the past two years JLL reports that 80 per cent of the 102 markets in their index have shown improvement with 14 showing significant improvement.

Sub Saharan Africa (SSA) was most improved with Kenya, Ghana and Nigeria leading the way.  Five of the top ten countries globally who made the the most progress with respect to governance and regulatory framework in support of a more positive business environment were in the SSA.

Easy online access to land registry information in both advanced markets such as France and Finland, as well as the less advanced such as Qatar, Uruguay and Kenya have also raised the global level of transparency.

The introduction of REIT legislation in Ireland, and the intent to do so in other countries such as Mexico, Panama, Kenya and China are new indications that globally real estate markets are becoming more friendly toward business.