InterRent Real Estate Investment Trust (IIP.UN-T) has dipped into the ranks of Bay Street analysts and named Brad Cutsey to the position of president. 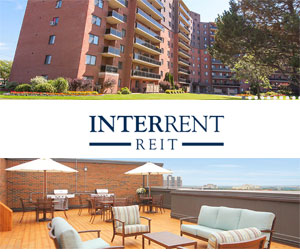 Cutsey, an investment services veteran with more than 18 years of capital markets experience, primarily in the real estate field, is currently a managing director and group head of real estate investment banking with Dundee Securities Ltd. He is also “very familiar with our assets and our partners” as he has followed the REIT in the roles of equity analyst and investment banker since the trust was formed in 2006, an InterRent spokesperson noted in a media release.

“We believe he will make a great addition to our senior management team. We have an excellent team and the addition of Brad gives the necessary bench strength to help scale our company.”

Cutsey starts his new job on April 6. He is away this week and unavailable for comment, a Dundee employee said.

“We view this move as an absolute positive for the REIT, increasing both the depth and breadth of the senior management team,” he wrote. “We expect this addition will eventually translate into increased activity and may potentially see InterRent increase its footprint into new markets.”

“It’s a great move for them, he is incredibly strong,” Sutherland added in an interview. “He was the top analyst a couple of years ago for StarMine rankings.”

InterRent is not the first real estate company to seek out and add capital markets expertise in its top ranks.

“At least initially he brings a lot of capital markets focus as opposed to operational . . . he will probably have to learn the operational a lot more as he goes on,” Sutherland said.

“But a lot like Shant Poladian when he took over FAM REIT, I think having someone in management that is really Bay Street-savvy, that looks at deals maybe not so much what it is doing for the bottom line but how it is going to be received by the Street, is something that a lot of REITs don’t have and I think gives them a leg up.”

InterRent has had some recent success in capital markets, raising $75 million in February in a bought deal. It looks like virtually every brokerage on Bay Street was involved in the financing, from Dundee Securities as co-lead, to Euro Pacific Canada as one of the many members of the underwriting syndicate.

A REIT spokesperson said the $75 million was earmarked for two recent acquisitions in the Ottawa area and for “working capital and general corporate purposes.”

The multi-residential REIT has been busy. It announced a $32.4-million, 280-suite high rise acquisition in Montreal in late January, a day after it unveiled a $27.75-million acquisition of a 286-unit portfolio that includes a 2.9-acre waterfront complex and 5.1-acre complex in Ottawa’s scenic west end.

Those deals were on the heels of a $58.5-million acquisition in December of 393 units in an Ottawa portfolio that consisted of one high-rise (169 suites), two low-rises (94 suites), 130 townhomes and almost three acres of vacant land that has already been severed.

While InterRent has been busy lately adding properties, it is a disciplined buyer, Sutherland noted. “They are very conservative, they do what they do very well, they don’t try to be everything to everybody. At the same time they have a couple of big things coming down the pike.”

Chief among those, the analyst said, is a 440-unit building in Ottawa that has been empty for nearly two years during an extensive renovation. The building at 201 Bell St., which featured 10,000 square feet of retail which has also been turned into residential, will begin occupancy this spring and is “a huge positive for them.”

InterRent purchased the 444-unit Fairview Apartments building for $38.6 million in mid-2013. At the time, the property was already going through a major renovation project under its former owners that included the installation of new boilers, elevators, electrical supply, a new roof system, five newly constructed penthouses and a renovation of the building’s suites.

At the time, InterRent CEO McGahan called it “our most ambitious repositioning to date.”

These are good times to be playing in the multi-res sector, Sutherland noted.

“It is one of the best inflation hedges in the REIT sector. Any time you look at the multi-res, you have got so many people rolling (leases) and you can keep up with inflation with the rents. So it is always a safe haven.”