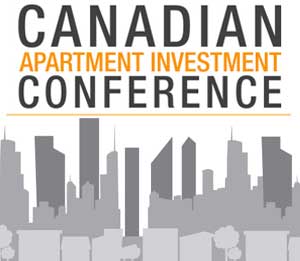 “CAPREIT’s approach has been to look for opportunities, and uncertainty creates those opportunities,” Kenney said of the REIT which oversees 43,000 multi-family units from Vancouver to Halifax.

For example, he said, CAPREIT (CAR.UN-T) took advantage of a financial crisis and the fact there was no multi-family rental market in Ireland in 2013 and purchased a sufficient quantity of condominium projects to become the country’s largest landlord.

Kenney added the office, industrial and retail asset classes are affected more by a slowing economy and that times of uncertainty are good for the apartment business, citing this as “a time of calm” for CAPREIT.

“We can’t lose sight of the fact that interest rates are so compelling. The strategy right now is to go as long as you possibly can and not worry so much about cap rates or current pricing. Take a long view with financing and look if there’s a place to add value when you’re looking at an asset.”

“I don’t think we’re going to see years of famine, but I think we’ll see a far more competitive and difficult market over the next five years,” said Phil Gillin, senior managing director and portfolio manager of Canadian property investments for Sun Life Financial, which recently closed on the purchase of Bentall Kennedy, one of North America’s largest real estate asset management companies.

“Knowledge and the ability to execute on strategies to create value are going to differentiate the people who win in the business and the people who are perhaps not quite as astute and have been riding on a wave of cheap money and ever-compressing cap rates.”

Comparing situations between now and 2008

While discussing today’s scenario versus the global financial meltdown of 2008 and 2009, Timbercreek Asset Management‘s Ugo Bizzarri said foreign investors are interested in Canadian real estate because it’s seen as a safe haven. However, the relatively small market size, lower returns than what are available in Europe and the question of when the strong cycle the country has experienced will end are all causes for some hesitation.

“Canada hasn’t had a correction while the rest of the world has,” said Bizzarri, Timbercreek’s co-founder and managing director of portfolio management and investments.“We’ve had 15 years of very, very good times. A lot of people are asking when the correction is going to happen in Canada and why it hasn’t happened.”

Homestead Land Holdings Limited chief executive officer Alf Hendry said that one of the biggest differences between now and seven years ago is the lower value of the Canadian dollar, which has made real estate more attractive to foreign interests.

“We’re now getting beat on bids, not by the typical people that we’ve been beat by, but by people from offshore. I don’t see that changing with the Canadian dollar being where it is.”

With foreign investors eyeing Canada more closely, the question of how domestic companies can compete with them when it comes to buying Canadian real estate was posed.

“I think any Canadian investor can outdo a foreign investor in terms of value creation and identifying investment opportunities based on their knowledge of the Canadian marketplace and Canadian business,” said Gillin.

“One of the things you can do is elect not to compete if pricing goes to a place where it doesn’t make sense,” said Tyler Seaman, the vice-president of hotels and multi-residential for Oxford Properties Group.

“At Oxford, we are a foreign investor in London, New York, Washington and Boston, and I’m sure that it’s said of us that we’re driving pricing up in those markets.”

Development is part of the mix

High Canadian building prices are one of the reasons why domestic investors are including development along with acquisitions in their growth strategies.

“When it gets this pricey, construction can make sense from an economic perspective,” said Hendry.

“We have very patient shareholders who are in this for the long term. They’re willing to accept a little lower returns in the early years because they know the returns are going to come in the later years.”

“We’re much more believers of not buying core anymore,” added Bizzarri. “We’re going to build our own core.

“It’s really not focused on going out and buying a piece of land. It’s about intensifying our existing sites.”