Lured by Quebec City’s impressive economic growth, Ivanhoe Cambridge is planning a $50-million-plus mixed-use development in the Quebec capital. The real estate company is partnering with a group of local investors and for the first time is working with SDLP, the real estate division of Sobeys Inc. 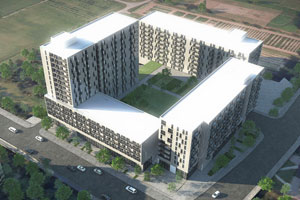 Projet QB (shown in the picture) will contain more than 400 rental units and 200 condominiums in the Cite-Universitaire district of Quebec City. The complex will also feature 43,000 square feet of ground floor commercial space, including an IGA Extra.

Initially, the development will consist of an apartment building with 300 rental units, a condo complex with 100 units and the commercial space. The first construction phase is anticipated to begin this summer and could take three years.

“We think it fits very well with what we set out to do in residential,” said Sylvain Fortier, Ivanhoe Cambridge’s vice-president of residential, hotels and real estate investment.

Fortier said Ivanhoe Cambridge, which has been increasing its rental and multi-family portfolio in the last three years, began 15 years ago with a New York portfolio and gradually increased its residential holdings to approximately 2,500 units. Today, Ivanhoe Cambridge has nearly 15,000 units spread across major American cities, in Canada and in London and Paris.

“Quebec City. . .  the difficulty we saw was to find critical mass, to find a good location,” Fortier said.

The Cite-Universitaire district fit the bill.

“We certainly like the Quebec City employment base,” Fortier said. “Being a capital, it gives us a certain comfort around employment, direct and indirect jobs.”

As well, Fortier notes that Ivanhoe Cambridge has a fondness for Quebec City. Besides investments in retail and office in the capital, the company has a showpiece in the majestic Chateau Frontenac.

According to the Quebec Federation of Real Estate Boards (QFREB), Quebec City currently has a surplus of condos due to increased construction in the last few years and a recent decrease  in demand.

“The 43 per cent decrease in the number of condominium housing starts in 2013 reveals a recent adjustment in the supply of condos in the area,” the QFREB said in a January 2014 report.

The QFREB reported that in 2013 it took 126 days on average for a condo to sell in the Quebec City area and average selling times are expected to increase further in 2014.

Fortier, however, remains confident, noting Ivanhoe Cambridge always looks at the worst-case scenario and he anticipates the company will recover its investment in the development.

The project’s proximity to universities, hospitals and a generally strong employment base make it a good risk-return, Fortier said. “Obviously, as on any project, you watch the pre-sale numbers and you typically shoot for maybe half before you actually start. You do follow your costs along the way.”

Fortier notes the rental is a good hedge if the economy starts to go sour, as it did in 2008-09. In a bad economy, people tend to rent more than buy. Ivanhoe Cambridge’s strategy therefore is to rent 400 of 600 units with a few hundred condos split over two phases with a pre-sale threshold that must be met. “So we think we’re kind of hedging our bets with this project pretty well.”

Moffet was introduced to Ivanhoe Cambridge through an existing network, Fortier said. “We really liked the alignment of interest, the way they think about this project, their experience, their success, and the fact that their home base is in Quebec City.

“It was the typical checklist we look for in a partner that we felt Pierre was bringing.”

Ivanhoe Cambridge partnered with Sobeys because it viewed a grocery store at the retail level as an attractive feature for tenants. Fortier said the company views such convenience of growing importance and noted that it’s becoming increasingly common to see smaller grocery stores in different locations.

Sobeys will own the store once it’s built. Ivanhoe Cambridge doesn’t currently see partnering with Sobeys as part of a “program,” but Fortier didn’t rule out working with them again in the future.

“When we repeat it elsewhere, if we like the other components, yes, we would.”