Ivanhoé Cambridge and partner Residential Land have made London’s Hamlet Gardens and 4B Merchant Square their most recent acquisitions in the U.K. capital. 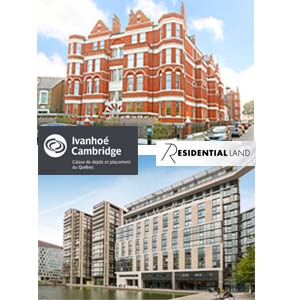 Hamlet Gardens is located in London’s sought-after Ravenscourt Park and comprises four buildings totalling 122 residential units (on top in the image). There are 60 residential units at 4B Merchant Square, located close to Paddington Station and surrounded by landmark parks, restaurants and retail destinations.

The purchase price for the properties was approximately $317 million. These transactions bring the number of multi-family assets owned by the partnership in London to 16.

The companies joined forces in February 2012 when Ivanhoé Cambridge made its first foray into London’s residential market with an investment of more than $150 million in four multi-residential buildings, totalling 207 units, in South Kensington, Hyde Park, Bayswater and Marylebone.

Peony Court, a multi-residential complex comprising 19 units in three buildings in South Kensington, and Chantrey House, a complex consisting of 28 rental units and five commercial spaces, were acquired for $100 million in December 2012.

A $73-million investment acquired 105 residential units in Kew Bridge Court in Chiswick and Imperial House in the Royal Borough of Kensington and Chelsea in October 2013.

The joint partnership between Ivanhoé Cambridge, affiliates of Apollo Global Management and Residential Land acquired Brandeaux’s interests in Thurloe Estate in Chelsea for approximately $198 million and Strathmore Court for approximately $79 million in March 2014.

Thurloe Estate includes 141 flats and a retail parade of 18 shops with a number of anchor tenants such as Ralph Lauren and OKA. Strathmore Court, located opposite Regent’s Park, has 21 residential units on six storeys and 10 retail units totalling just under 5,000 square feet.

Montreal-based Ivanhoé Cambridge, the real estate subsidiary of the Caisse de dépôt et placement du Québec pension fund, has direct or indirect interests in more than 160 million square feet of office, retail and logistics properties as well as in more than 23,000 multi-residential units.