The two main companies of BBDO Paris, CLM BBDO and Proximity, will move into Ardeko in the first half of 2014.

Headquartered in New York, BBDO has 15,000 employees in 289 offices in 81 countries. It is the second-largest global advertising agency network. 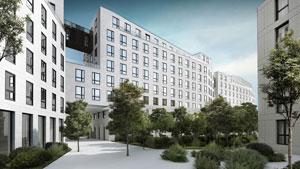 Located in the Rives de Seine district of Boulogne just outside of Paris, Ardeko is still under construction. The C Tower of the office complex is scheduled for completion before the end of 2013.

Upon completion, the complex will contain about 194,000 square feet of office space divided among three independent buildings. Each building will have its own lobby and offer between 56,000 and 72,000 sq. ft. of space.

Ardeko, being built to stringent environmental standards, is striving for LEED Gold and will also meet HQE  requirements,  the standard for green building in France.

The building is being organized like a campus built in blocks, which offers some flexibility in tenant occupancy.

The interior is described as having high ceilings with technical raised floors, large overall areas and good lighting.

The complex includes a 330-seat restaurant with an outdoor terrace, a cafeteria and lounge and six shops at the foot of the building. A concierge service is under consideration.

Ardeko encourages green modes of transport. The building includes bike parking with lockers and showers as well as charging stations for electric vehicles.

JLL and Catella are marketing the building while Cushman & Wakefield are looking after leasing and property management.

Other properties in France

Besides Ardeko, Ivanhoe Cambridge owns a number of other properties in Paris.

In 2012, the firm continued to expand with the purchase of a building containing 326, 100 sq. ft. in the heart of Paris’s central business district.

In its 2012 activity report, Meka Brunel, the company’s executive vice-president for Europe, said: “In 2012, we successfully spearheaded a number of very complex operations in Europe. Despite the trying market conditions, we proved that we are a major player and a force to be reckoned with.”

Ivanhoe Cambridge, through its multiple subsidiaries, has assets in more than 20 countries valued at over CDN$35 billion as of Dec. 31, 2012.