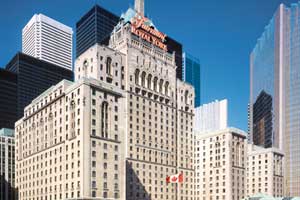 The Montreal-headquartered company has entered a definitive agreement to sell a 60 per cent share to KingSett Real Estate Growth LP No. 5 and 20 per cent to InnVest Real Estate Investment Trust (INN.UN-T), while retaining a 20 per cent interest in a deal that values the 85-year-old property at $186.5 million.

KingSett will become the managing partner of the joint venture, which expects to finance the acquisition with conventional mortgage financing. InnVest will become the hotel asset manager and oversee the property’s hospitality operations while working with Royal York operator Fairmont Hotels and Resorts.

The deal is expected to close on Jan. 30 and is subject to customary closing conditions.

A right of first offer

“We are delighted to partner with KingSett and Ivanhoé Cambridge on what we believe is one of Canada’s most prestigious hotel properties,” said InnVest managing director Ed Pitoniak. “We are also looking forward to extending our relationship with Fairmont.”

The Mississauga, Ont., company also holds a 50 per cent interest in Choice Hotels Canada Inc., one of the largest hotel franchisors in Canada.

The Royal York is well into a $100-million renovation project, which has moved from significant infrastructure projects to a phased guest room renovation program to drive higher top-line performance. More than 500 guest rooms are expected to be fully renovated by the end of January.

More than $50 million in additional funds

The joint venture parties will invest more than $50 million in additional funds for renovations over the 24 months following the completion of the acquisition. There are several potential redevelopment possibilities to capitalize on the surrounding market’s growth, including reconfiguring the hotel’s retail space.

InnVest believes the Royal York offers several benefits to its unit-holders, including compelling value with an attractive price per room entry point and expected significant income growth opportunities from recent and ongoing investments in the hotel and surrounding areas.

“With the nearing completion of the Union Station enhancements, as well as the introduction of the Pearson Airport rail link, the Fairmont Royal York’s location places it at the commercial, cultural and transportation crossroads of Toronto,” said Pitoniak.

“With the extensive renovations to the Royal York Hotel’s infrastructure and guest rooms, this asset is poised to deliver strong earnings growth and benefit from its irreplaceable location in Toronto’s city centre.”

Ivanhoé Cambridge has an undisclosed investment in KingSett and vice-president of public affairs and media relations Sébastien Théberge called the joint venture a “win-win” that involves two solid partners specializing in hotel assets dedicated to the future success of the Royal York.

Program to sell most of its hotel properties

It established a disposal program in 2011 to sell most of its hotel properties, with the exception of a handful of key ones, including the Royal York, Quebec City’s Fairmont Le Château Frontenac and Montreal’s Fairmont The Queen Elizabeth and W Montreal.

“We’re very well-advanced into the disposition program,” said Théberge. “If we count the Royal York, I think we only have eight remaining out of 70.”

A key reason for Ivanhoé Cambridge holding on to a stake in the Royal York is its strategic location in the immediate vicinity of a new development, in partnership with regional transportation agency Metrolinx and Hines Canada Management ULC, which will feature: a 250,000-square-metre (2.7-million-square-foot) multi-phased, premium office complex at 45-141 Bay St. built to LEED-Platinum standards; a new, larger GO Bus terminal with amenities at the base of the office tower to reinforce nearby Union Station’s transit hub capabilities; and an elevated park above the rail corridor with new public green spaces.

InnVest and KingSett entered a strategic capital relationship in March where KingSett agreed to provide debt financing and offered to participate in any non-core hotel asset sale program initiated by the REIT.

“This transaction illustrates the value of our strategic partnership with KingSett Capital and is a key step in our becoming the leading growth platform in the Canadian lodging industry,” said Pitoniak.

“Our relationship with KingSett provides us with optionality and scale to grow our portfolio as we continue to look at other opportunities in key markets.”

KingSett managing partner Jon Love returned RENX’s phone call but declined comment on the deal. The Toronto-based private equity real estate investment business co-invests with institutional and high net worth individuals through its growth, income and mortgage funds. It has more than $5 billion of assets under management.