Ivanhoe Cambridge has reportedly sold an office building in Paris, capping a week in which the company announced the sale of two other premier real estate assets in North America. 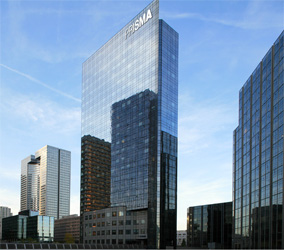 Tour Prisma, a class-A 22-storey office tower in the La Defense district, was sold to Invesco Real Estate.  Invesco bought the 23,152-square-metre property for an Asian state pension fund for an undisclosed sum, according to a Europe Real Estate report.

Rory Morrison, senior director of fund management for Invesco, said in the report the building is a high-quality and modern property, fully renovated in 2011. Morrison said Invesco was able to purchase the tower at “an opportune moment in the investment cycle, given the substantial discount achieved compared to pricing for core Paris CBD investments.”

La Defense is regarded as a premier business district in Europe and home to 2,500 companies. The area has 1,500 corporate headquarters of both French and international firms and a total workforce of 185,000. Computing services, energy, finance and insurance industry companies occupy the buildings.

Last week, Ivanhoe Cambridge also announced it is selling its 50 per cent stake in the historic Sun Life building in downtown Montreal, as reported by the Montreal Gazette.  The landmark building was constructed in 1914 and through a series of additions and renovations grew to 26 floors and a million square feet of leasable area.  Ivanhoe Cambridge purchased its share in 2001 from the Sun Life Assurance. Sun Life continues to own the other half of the building.

Tour Pacific, which consists of two, 24-storey towers, was 70 per cent occupied at the time with the main tenant having a short-term lease due to expire. Tishman Speyer said it planned to carry out substantial renovations on the property. CoStar Finance reported the deal for the Tour Pacific was worth 220 million euros.

In November 2013, Ivanhoe Cambridge announced advertising giant BBDO Paris would move into its ARDEKO office complex. ARDEKO  was built and created by Hines European Development Fund Global (HEDF) with Ivanhoe Cambridge and is located in the new River Seine business district in Boulogne-Billancourt, in suburban Paris.

Other Paris office assets listed on Ivanhoe Cambridge’s website include B Building and Tour T1 in the Defense district as well as Avenir Grande Armée, the headquarters for Peugeot located on the avenue which connects the Arc the Triomphe to the Porte Maillot.

Through its multiple subsidiaries, Ivanhoe Cambridge has assets in more than 20 countries valued at more than $35 billion Cdn as of Dec. 31, 2012.