As part of its long-term strategy, Ivanhoé Cambridge is reducing its investment in hotel assets with the intent of dropping its portfolio, which once numbered 70 properties, to three. 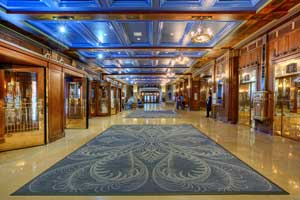 At the same time, the company is reinvesting in their remaining assets and on Wednesday evening unveiled its most recent investment in the renovated Fairmont Le Château Frontenac.

About 600 people from all walks of life were expected to attend the Wednesday event Ivanhoé Cambridge spokesman Sébastien Théberge described as “celebrating a milestone in the history of a landmark hotel.”

Three years ago, the company decided to sell off most of its hotels, preferring instead to focus on its three primary asset streams – shopping centres, office buildings and multi-residential properties.

“These are areas we’ve developed an expertise,” Théberge said, adding the company has other investments as well. “We have growing investments in the residential market and in Europe have invested in P3 (PointPark Properties) which is specifically a logistics-based asset class.”

At its peak, Théberge says Ivanhoé Cambridge held $4 billion in hotel properties. The company has so far sold all but 10 and plans are to retain just a few.

“The Chateau Frontenac is a pride for anyone who owns it. The Queen Elizabeth Hotel in Montreal connects to property we own (including Place Ville Marie and the Eaton Centre) and the W in Montreal (located near picturesque Old Montreal and the Montreal Museum of Fine Arts) is connected to our head office so these three we’ll keep.”

The Chateau Frontenac has been part of Ivanhoé Cambridge’s portfolio since 2011 when it  acquired the property from Legacy Hotels REIT. Originally opened in 1893 and added to in 1924, the hotel has played a significant role in history and is featured prominently in the skyline of Quebec City.

As with all its properties, Théberge says Ivanhoé Cambridge will renovate and expand as needed to keep the remaining hotels well-positioned and well-maintained. Both the Queen Elizabeth and the W in Montreal have had or will receive upgrades and renovations.

Chateau Frontenac renovations included a $9-million investment to replace the landmark copper roof and complete masonry work. An additional $66 million had been allocated to reposition the hotel through investment in components including the creation of a stronger business sector, the transformation of more than 300 rooms, and a revamping of its food and beverage component for the benefit of locals and tourists alike.

“Our food and beverage component has undergone a significant upgrade and rebrand to offer a truly Quebec experience. From our cheese cellar to the wine and cheese bar, visitors will now experience more and the best of the local culture,” Théberge said.

Will be sold in an orchestrated manner

Théberge says Ivanhoe’s remaining seven hotel properties on the block will be sold in an orchestrated manner according to the market and when they are ready. Earlier this month, the Vancouver Sun reported that Victoria’s 106-year old Fairmont Empress was put on the block for an undisclosed price, but noted the 477-room National Historic Site had been assessed at $89.9 million “making it one of the most valuable properties in Greater Victoria.”

Ottawa’s Chateau Laurier, opened half a block from Parliament Hill in 1912, went on sale in July 2013. At the time the Toronto Star reported the U.S.-based investing information website Real Estate Alert had estimated its value at $125 million and that another property, the Fairmont Washington D.C. Georgetown, was also for sale with an estimated value suggested by Real Estate Alert of $185 million.

In May, Ivanhoé Cambridge sold its portfolio of 18 European hotels to Apollo European Principal Finance Fund II, a fund affiliated with Apollo Global Management, for an undisclosed amount. The hotels were located in Austria, Belgium, France, Germany, the Netherlands and Spain and operated under the IHG brands of Crowne Plaza, Holiday Inn, and Holiday Inn Express.