Calgary-based real estate veteran Robert Duteau sure knows how to pick them. 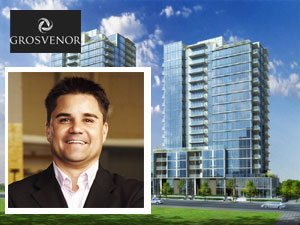 The 46-year-old cut his teeth in the industry working for the Reichmann family’s Olympia and York property empire for 15 years before joining Ivanhoe Cambridge, most recently as vice-president of investments for the past four years. He adds another prestigious name to his resume in his current role, signing on with a U.K.-based company that boasts a three-century-plus history.

At Grosvenor Americas, Duteau has been charged with heading up the company’s Cowtown’s development program as senior vice-president, development.

Duteau has only  a couple weeks under his belt with his new employer but already knows about the job at hand: complete the Avenue West End condo development in downtown Calgary and the Smith project in the Beltline as well as identifying and executing future development opportunities.

Expect more West End, Beltline focus from Grosvenor going forward, based on Duteau’s comments. “It’s a very strategic decision to be in those markets, we find both of them to be very accessible to the downtown core, so they attract people who desire urban dwelling near what we think is a very vibrant city centre.”

Call it Alberta’s version of the Toronto condo boom.

Two years ago Grosvenor unveiled plans to build Avenue – a two-tower condo project (24 and 18 storeys with 319 residential units) – in partnership with Cressey Development Group. The towers are sited at the corner of 5th Avenue and 10th Street S.W. on what the Calgary Herald calls “one of the few remaining parcels of land in Calgary’s west end.”

Grosvenor has also started construction on Smith, an 18-storey, 129-unit tower on at 15 Avenue Southwest and 6 Street Southwest, scheduled for completion in 2016. It is located “just steps” from the 17th Avenue shopping and entertainment district, Calgary’s version of Robson Street in Vancouver.

Next up for Grosvenor is a condo project situated at 15-24th Street “which is a great location that will be a long-term project for Grosvenor,” said Duteau. The project timeline calls for the company to submit a redevelopment plan by the end of the year.

“Obviously the current market economics will dictate what is the right time to pull the trigger – but Grosvenor is a 300-plus-year-old-company and takes a very long-term view to the projects that we are investing in. This is a fantastic site, it is right at the corner of 4th Street and 17th Avenue.”

The Calgary office is also working on the acquisition of a fourth downtown parcel of land, Duteau said.

Fresh off his orientation with his new employer, Duteau explained London-based Grosvenor operates under a well-defined “Living Cities” development philosophy.

“Essentially what that means to Grosvenor is we are focusing on cities that are alive, that are evolving, and it also describes the company’s approach that we feel we live and breathe the cities in which we are investing. We have got our finger on the pulse. You can describe it as urban or inner city, that is really our focus.”

Grosvenor’s buyer base for its condos are and will continue to be predominately young and professional, and vibrant areas such as 17th Avenue are magnets for this demographic. “It is one of the more desirable places to be, certainly for young people and the net migration into Calgary is young people looking for jobs.”

Grosvenor, which has been operating in North America for 60 years, is based in San Francisco although its Americas president operates out of Vancouver.

Duteau describes the crude oil price plunge as the third downturn he has lived through during his Calgary real estate career, a fact of life in a commodity-fueled economy such as Alberta’s.

“People are talking about them happening quicker than the time before, I think it is anyone’s guess when we are going to be out of $50 oil. But I think for great sites and good projects, those are going to continue to go ahead. The sites we have chosen are very urban, very similar to what is happening in Toronto, and still represent good demand from people wanting to be in those types of locations.”

Duteau, a member of the International Council of Shopping Centers and National Association of Industrial and Office Properties as well as one of Calgary’s Top 40 under 40 in 2008, may be best known in the city’s real estate circles for his contribution the city’s cultural scene.

He is the chairman and founder of the annual Stampede Roundup, initially known as the O&Y party, which takes place during the annual Calgary Stampede (but is independent of the big event).

One of his major duties at the charitable event, which attracts about 20,000 people, is to sign the music talent for the outdoor music festival. He has brought in the likes of Billy Idol, INXS and Dwight Yoakam over the years.

“Musically, I am trapped in the Eighties because that was what was important to me when I was growing up,” he said. “Billy Idol was incredible, one of my favourite ones was Roger Hodgson of Supertramp, that was a stellar evening. Last year we had Def Leppard.”

This summer marks the 20th anniversary for the Stampede Roundup event and Duteau promises the headliner will be an attention-grabber.