The richest man in Canada is about to start work on a development project that may change the face of Vancouver forever.

Reliance Properties and Jim Pattison Developments are building one of the largest projects ever undertaken in Vancouver: a million-square-foot mixed-use development that will include the third-tallest building in the city. 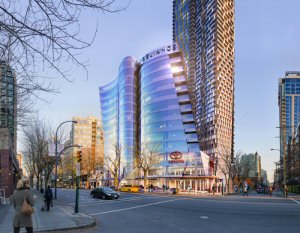 The $500-million Burrard Gateway project, which received approval from Vancouver City Council in mid-December, will consist of three LEED Gold-certified buildings.  That will include a 13-storey office building with a Toyota dealership at its base and 35- and 55-storey residential towers. A seven-storey mixed-use podium will connect both. The 55-storey tower will be the third-tallest building in the city after the Shangri-La and the proposed Trump International Hotel & Tower Vancouver.

The tower will exceed the city’s height restriction limit by 50 feet, the Vancouver Province reported. However Brian Jackson, the city’s general manager of planning and development, told the Province the city was prepared to budge on the height because “this particular applicant was able to design what we think is a building which contributes architectural excellence to the city.”

Vancouver’s IBI Group will design the concrete and glass residential towers, which will hold 810 condominium units in all. The 55-storey tower will feature a white concrete waffle wall aligned with the Burrard Street Bridge entrance to downtown.

The developers say the showroom will be unlike any other in the city. Multi-level display “fingers,” extend toward the glass exterior, replacing the traditional showroom sales floor, and creating what the developers described as an “imaginative, futuristic display space.”

The development consolidates 27 city lots on and around the current site of the Jim Pattison Downtown Toyota Dealership. Reliance Properties and Jim Pattison Developments jointly own the site, respectively holding 60 and 40 per cent of the property.

In the development process for the last three years, the project will include a public plaza with a café, public art installations, a vertical water display, landscaping and public seating.

Burrard Gateway amenity contributions include support for a LGBTQ community centre, and heritage density, transportation, park and cultural funding. The Vancouver Province reported the cost of the amenity contributions along with development cost charges adds up to more than $40.6 million.

Reliance Properties is a privately owned Vancouver company that builds everything from micro-condos to luxury boutique apartments. Jim Pattison Developments owns and manages a portfolio of nearly 10 million sq. ft. of  buildings throughout Canada and the United States.

Pattison, with an estimated personal fortune of $9.5 billion, edged out David Thomson as Canada’s richest man in a new analysis from Bloomberg. Among the businesses he owns are Overwaitea Foods, SunRype drinks and fruit snacks, Ocean Brands seafood and car dealerships. Overall, the Jim Pattison Group brings in $7.5 billion in sales with 473 locations and 35,000 employees.